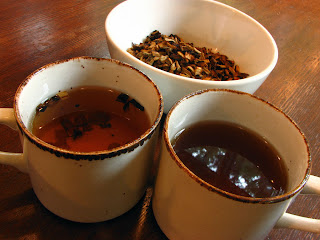 Burdock Tea Update
Today we tried the roasted burdock, both steeped as tea (left in photo) and ground and drip-filtered like coffee (right). The coffee version tasted like toasted dust, quite honestly; the steeped version was a rich and full-bodied tea that I must say I shall make again, for enjoyment reasons, alone. Plus it is apparently good for my skin and digestive system. I think we'll have to go dig some more! And the book is right: neither milk nor honey would improve the flavour.

First Day of Daycare for Rhiannon
Rhiannon is in gradual entry for daycare. That means that today after preschool, Tali and I met her briefly, then disappeared to work on Tali's journal while she spent nearly two hours with the daycare, next door. 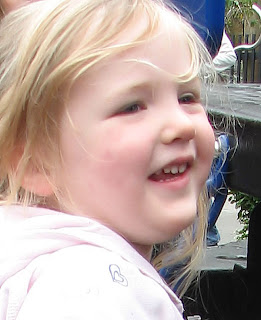 She didn't seem involved at all with the other children, but none of her usual friends were there, today, which didn't help. However, after finishing her lunch, she was very upset to have to go home before playing, some more. I suppose that's a good sign!

When we got home she was really too exhausted to function normally. She spent the rest of the day playing various "party" and "visiting" games in the play fort Tali had constructed, with intermittent crying and whining, usually about nothing. Eventually she just simply fell asleep and was barely able to be roused for dinner. I am realizing this past week that although Rhiannon doesn't exhibit moderate amounts of social/emotional stress in the usual ways, she certainly does experience it. She appears to just go forth with gusto to join groups of children, or new experiences, but afterwards she is a bit of a nervous wreck. We will have to keep this in mind more than we've been accustomed to over the past few months. I don't want her learning to bury her feelings, until they are too severe to keep in. 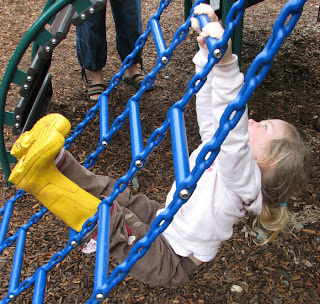 I've been asked by other parents why I would send my daughter to daycare (or even preschool), since those apparently contradict my unschooling philosophy. The answer is simple: no, they don't! And of course more complicated, too. Rhiannon is in daycare mostly because she wants to be. She would like more time to visit with her friends than the 2.5 hours, twice weekly that she gets at preschool. She thinks it's fun to play with friends in a big place with lots of toys. I don't really need her to be there, right now; she could stay home with her Pappa, while he's working -- she can entertain herself very well. She could even attend the Learning Centre with Mama and Tali. She has done both in the past few weeks, and neither is a problem. But neither also has the group of other nearly-three-year-old girls whom she would like to play with. And perhaps it will work out well for me, too: when Taliesin is comfortable enough at the Learning Centre for me to leave him there, Rhiannon's visit to daycare after preschool will mean that I have about 5 hours free, once a week. That's pretty amazing. I could maybe even get a paid job, develop my arts career (what? arts career? what's that?!). That would be a very big deal, to me. And this is not happening yet, and I'm not pushing it. But if it does, I will be happy. 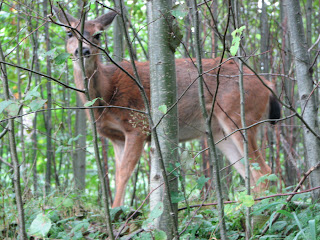 And why preschool? Because my mother is the teacher. And the reason she's the best preschool teacher available is because she is the single most important source of all my educational values. That is to say, she does with her preschool program pretty much exactly what I hope to achieve for our children's (and our own) education, for the rest of our lives.

And Now Back to the Burdock
For Taliesin's Earth Walk he chose to go into the new alder forest behind the preschool. We saw a deer peeking at us, 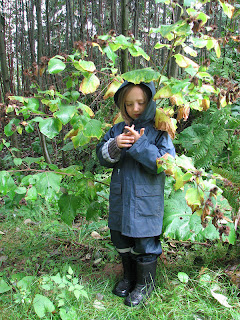 and talked about deciduous forests, and how the alders grow on disturbed ground, just like ... burdock! I didn't intend to make much mention of the burdock growing around the alders, but as I stopped to take a picture, Taliesin became very interested in the burs, which were largely absent from the plants we were digging up, yesterday. When I asked him if there was anything we were finding he'd like to learn more about, today, he said enthusiastically: "burdock!!"

We looked burdock up in Pojar & Mackinnon's "Plants of Coastal British Columbia". Tal was most interested in the fact that burdock was the inspiration for velcro (he drew the little hooks in great detail in his journal). Also he found it interesting that Cowichan healers use boiled burdock roots to help arthritis. Mostly, it turned out, he wanted to learn about totem poles, and, upon discussing them, was a little disappointed to learn that they were not originally Cowichan, which is too bad, since the Cowichan people live around Nanaimo, and he at least knew where that was, 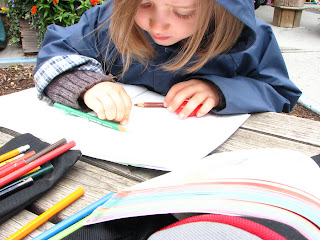 approximately. So goes the windy trail of homelearning. :--)

So back we wandered to wait for Rhiannon at daycare, and Taliesin drew some burdock in his journal. He said he was going to print "This is the beginning of burdock season." But he got a little too distracted by the preschool cleanup happening around him and by the dhall snacks he was eating, and only got half-way through the sentence. Oh well. No pressure. We had a good day.
at 11:27 PM