BBC documents the plastic garbage gathered in 1/2 an hour on one beach on Midway in the central Pacific ocean: See video here.
at 10:06 PM No comments:

Further to my original post about TV (read it here), I want to link to this interesting article (and comment section) by Ali Hossaini: Don't Kill Your Television.

Of course, I do like the Kill Your Television site, at www.turnoffyourtv.com. My brother has the Kill Your TV sticker on his stereo, which I think is a great location! But The whole notion of "killing" the TV is kind of against my philosophy. I want more of a personal decision to consume media (and anything else) consciously. Kill Your TV isn't as blind as the slogan seems, but they're still wearing the slogan. And as an artist I know well how important a shocking slogan is. Still... it's not my style.

I'd also like to make it clear that MATV is not a card-carrying group of TV-killers. You don't ask permission to "join". It's just a movement of people making the decision to seek entertainment in real life as opposed to reality on TV. So if that means you have a TV in your house but only take it out for special events, or even choose to watch a particular program on a regular basis, that's OK. MATV is about being very aware of the media diet we consume and feed to our children, and taking social responsibility for our consumption. It's not the media's fault if we watch TV -- we're not slaves! It's our own decision, and whether we trash expensive new TV sets and forbid our children to watch TV at their friends' houses (they will anyway, of course), or keep 3 sets in our homes and watch them simultaneously 24 hours a day, we do it fully aware of the decision we've made. I hate to hear people mourn the fact that they watch so much TV; it's up to you to turn it off! And similarly, we can't stop our children from watching TV by forbidding it; we can only provide them with enough intelligence to look at it critically, see the value and the detriment in what they watch, and feel inspired.

Edited to answer some questions people have been asking:

No, I haven't read Jerry Mander's book, nor am I actually very knowledgeable at all about this whole issue, other than how it plays out in my own home. I'm always interested to hear your opinions, experiences and discoveries; don't hold back!!

I am very aware that children who don't watch TV or play video games may want those things all the more. In my own home that's definitely happened; when we go somewhere with a TV on, they can't peel their eyes away from it, and, quite frankly, neither can I sometimes! They're also not desensitized to the violence or even the blaring assault of light and sound. I'm not actually sure that's a good thing, either; it's certainly caused them not to fit in in some of their social circles. They've actually been quite traumatized at times to hear the gruesome stories some of their very young friends tell. I once went out and rented Sleeping Beauty just so my kids would get some ever-so-slightly-violent pop-culture, but it was a huge failure; Tal said it wasn't nice, and he didn't like that they made the witch bad, and Annie just sobbed her way through the movie and ended up with nightmares. Regardless, I still whole heartedly believe that we're doing the right thing for our own family by keeping the TV and video games out of our house, especially in these early years. Here's why:

We arranged to have both the preschool class and Tali's homeschool program come to our house for May Day, this year. Both events (yes; in one day; it was busy but fabulous!) were wonderful!!

Of course, as usual, I can't show you much because all my photos contain children whose parents I've not asked for photo-posting permission. Nevertheless, here is some of what we did:

The maypole! It had 20 ribbons, this year: an outer circle of 10 arranged to represent the solar year (red for the solstices, pale-green/deep-purple paired for the equinoxes, and rich yellow for the cross-quarter days) and 10 more inside in an array of various colours. We danced and undanced the pole with the 3-year-olds in the morning, and then danced it in a more complicated pattern and weaving with the older kids in the afternoon.

My Mum brought the preschool children's fish windsocks and they ran around with them on the extremely blustery day in the field. This is my Mum, who follows childrens inspirations to create a beautiful, adventurous, developmentally appropriate and yet uninhibited child-led preschool experience. See the joy and beauty in my Mum? That is my opinion of what learning should be. Thank you for making it a reality, Mum!! Afterward you see Annie running with her lovely windsock creation. 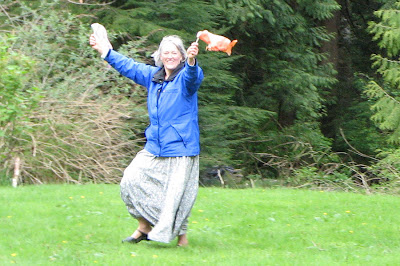 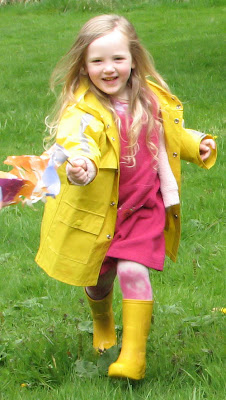 With Tali's learning group we also sang some circle songs, did a spiral dance, and made a mandala with lovely bits of plants and stones they'd found on their walk, here. To the right (the south stone of our circle) you see oven mitts atop the cauldron of hot apple cider, freshly off the May fire.

I don't actually think there are conspiracies, particularly. Well... of course there are; it's inevitable, but not on the grand-scale that many people are suggesting. I think it's actually a tragic shift in our global culture from local to global. And in losing our local awareness and concern, we get swept off into the desire for money, possessions and power. We forget about the importance and simplicity of true happiness. Happiness isn't just at home, it's inside -- inside where there are no shops, no responsibilities, no ladders to climb. It's so simple we've forgotten how to find it.

I actually don't know anything about the reptilian theory, but I wonder if the real villain isn't something much more elusive and awful. It's heartless because it's unconscious: it's our own blindness; our own detachment from our souls. And I find it terribly sad.

I do believe that "we're in a lot of trouble", but I think it's because we've lost the collective desire to create our own happiness. And many people are trying very hard to change that, to inspire others to be impassioned, etc. but too many are just looking to blame, which of course gets us nowhere. Looking for someone to blame (as in a conspiracy theory) is just as sad as looking for someone to make us happy, to entertain us, etc. What we once did as a species to create our own peace and happiness, we now look to have served to us. But that's impossible.

A large part of the reason we're unschooling is to keep our kids out of the consumerist social scene that inhabits any large group of varied people (like school). We don't want them to lose touch with their inner peace and personal desire for happiness. We don't want them to forget the importance and greatness of their own self-designed morality and thought-patterns. Schools have many advantages, and we certainly cannot create that kind of social learning here at home, or with the small groups we associate with. But I hope that allowing the children to lead their own learning and social lives gives them the personal awareness and strength to be whoever they were born to be, without the hindrance of having to measure up or conform to a global culture that is (in my opinion) losing touch with its soul.
at 3:13 PM No comments:

I suspect the unschooling blog is not exactly the right place to put this; these videos are quite beyond the children at this point. But it's a significant part of our interest, so it's all learning, right? If you never had time to watch Zeitgeist (though you still should; it's wonderful), then these little youtubes are pretty good, too. :--)
I don't necessarily believe that everything is controlled by the handful of people suggested in Zeitgeist; I think it's controlled by all of us... but too many have been drowned in the wash of consumerism; too many are lost in the struggle to be at the top of the money tree. And it's not making us happy.


Video after the "We're in a lot of trouble" video:


Money and the Federal Reserve: