Rhiannon, who neither of us worried about at all, is showing some signs of stress with her new busy schedule and "big girl" activities...

"Emotional Crisis"
Well that's the alert my mother apparently got as she was packing up to leave the preschool for the day. What happened was that Rhiannon had been too nervous to release all of her pee on the preschool toilet, just before being taken to ballet, downstairs, and had had an accident at ballet. In typical Rhiannon-fashion, she panicked before even having the accident, and started screaming "NO! Go away!", and when the teacher realized what was happening and tried to take her to the bathroom, she fought bitterly, punching and screaming. That's the dark side of our gentle girl: she cannot abide making mistakes.

And when they called her Pappa at home he wasn't there, so they called upstairs, and Rhiannon was rescued, to await her Pappa's return, five minutes later. She was so emotionally traumatized that when she got home she slept for hours, then sat still, pale, and nauseous for the next few, until a Sesame Street movie revived her, emotionally. When Big Bird got home again, Rhiannon perked up instantly and declared a vast hunger. She consumed all of her uneaten lunch from before, and then 1/2 a trout at dinner. It's possible her nausea was caused by a very short-lived bug, but it seems much more likely to us that it was a reaction to the "emotional crisis" during her first ballet class of the season.

She says she'd like to continue taking ballet, but unfortunely, due to low registration, her class was canceled and we're not sure there's another at a suitable time. Hopefully next term she can begin again!

For entertainment... here's Rhiannon by our outhouse at home. She's actually quite confident on the toilet, now... especially if it's the outhouse! 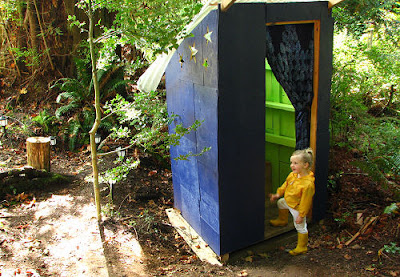 Tali at the Learning Centre
Despite Taliesin's promising act of allowing me to go get the mail during his class, the first week, he is not at all ready to have me go, yet. It isn't even until the afternoon that I am able to sit in a different room and he forgets me. Still, as with circus school, I see is strength increasing, and know that the need for my company isn't permanent. So while Markus dealt with Rhiannon, I attended school with Taliesin, today.

Tali participated in some of the kindergarten tasks and some of the older kids' assignments. He delighted very much in the art activity, where he had a chance to make a drawing of his teacher, Amy, as she sat in a poufy pink dress and shawl, having tea at "an impressionist cafe". At lunch he played wildly with the grade one and two boys in the yard, telling me later: "I was playing Pikachu! We had to run! Miles was the guy who pushes the guys over and I was Pikachu. Mama do you know who Pikachu is?"

His face lost it's enthusiasm. "No." Apparently I've not developed his knowledge of pop-culture well enough.

But the day went well. In the end Tal decided to carry half of our luggage home. As we walked home together, hand in hand and still blissfully unaware of Rhiannon's traumatic day, I thought about how blessed I am to have the opportunities I have here, to be able to share my child's day with him, to be there when he needs me and to be wanted in his life. And when I got home I realized how lucky, too, that Markus is able to work from home and be there for Rhiannon when she needs somebody. If I didn't have him here, I would have had to take Tali out of school for the afternoon to be with Rhiannon. But I didn't. What a blissful life we lead!