To This Day -- Shane Koyczan

This post is inspired by the recent experience of a girl I don't know - a six-year-old homeschooler who was called out for not being in school during school hours, and told, right in front of her father, that that was not right, and she should have someone other than her parents teaching her. The girl was distraught.

Shall I list off the ignorant, often prejudiced comments my kids have been subjected to during our 6 years of unschooling? Why yes, I think I shall, because it's a relief to share, and maybe some of you can relate. Here are the major ones, off the top of my head:
Of course, this doesn't include the multitude more comments I've received, personally, or which my children probably didn't tell me about, or which I can't remember. They also have been criticized for the clothing they wear, for not believing in God, for our family's painted car, my son for his long hair, for wearing gumboots in the city, for wanting to understand too much about science demonstrations, and even for having allergies (by people who actually told them that allergies don't exist, and fed them food they're allergic to, so that I could deal with the subsequent days of reactions). And on one memorable occasion, as the kids and I were seated in the local bank filling out their forms, together, on the day they got their first savings accounts, we were pulled from our activity by our local police officer. He glared at the three of us, cleared his throat loudly so that we all looked up from our forms, and snapped so that everyone in the bank could hear: "Shouldn't you be in school?"

"No." I said, glancing at the clock behind him. "Because my children are unschooled, and because, even if they did go to school, school was out at least 20 minutes ago." My kids grinned at me, the cop apologized, and left with pink cheeks. I later told my kids that if I'd really had my wits about me, I would have reminded him that we do not yet live in a police state, and that even if they did attend school and even if school had been in session, it is my right to pull my kids out without his permission.

We went home with a little righteous pleasure, and also a little flustered and grumpy. I shared the story with many people, because I think I needed to feel validated. Am I doing the right thing?

This is why criticism hurts - because it digs at our convictions and makes us question them.We all want to feel the arms of our social support system around us, but I think that, although we know these experiences hurt, they also help us grow stronger. We need to question our convictions! We need to re-ask the questions we think we've already answered. Maybe one day it will be right for our kids to go to school, or to try the foods they've avoided for years, or to cut their hair and get a regular job. But meanwhile, one of the greatest lessons my kids are getting from being unschooled is that of diversity. They tread the waters between their schooled, homeschooled, half-schooled, and unschooled friends, of many different ages, interests, and backgrounds, and my kids have the benefit of learning earlier than many others that there is nothing unusual or threatening about this natural diversity. I love that!

I also love that in every ignorant question is an opportunity to teach somebody. In journeying down this little-traveled path, we have the privilege of being able to report back from the front; of forging the way for others, and of pulling down some of the hurdles before they get to them. We make mistakes and tell about them, so that others can feel reassured, and maybe both we and they can avoid some of the same pitfalls, later on. That feels really good.

When I was a little girl my teacher told my mother that I was "different". That was a death-knell for my self-esteem at the time, but I credit it for my courage, now. It also provided a bit of a cushion between my ego and the incessant threats and teasing I endured. I was put in the Special Needs Enrichment Program (later called the Challenge Program), which as far as I knew meant I just had a big learning problem. People told me I was smart, but all my report cards said I was not working up to my potential. When I was a teenager I actually asked my mother if I was, as we called it then, "mentally retarded". She couldn't understand why on earth I thought that. I have come out of my childhood with a slow-growing understanding that first of all, I am not stupid (this still amazes me), and that I am not even particularly "different". I found my many tribes, and a few close and treasured friends, and that too feels really good. I'm glad to pass this gift of experience on to my children, who are, themselves, different, both from every body else, from each other and from me.

So bring on the odd questions, assumptions and prejudices, World! We don't mind answering, and we'll try to do it with compassion, because sharing is wonderful.

And of course it sometimes hurts. But luckily it turns out that my kids are not sick of me, and my arms are waiting when the pain of ignorant criticism gets them down. 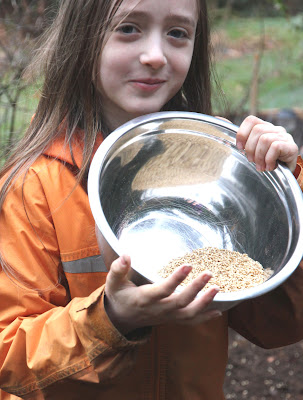 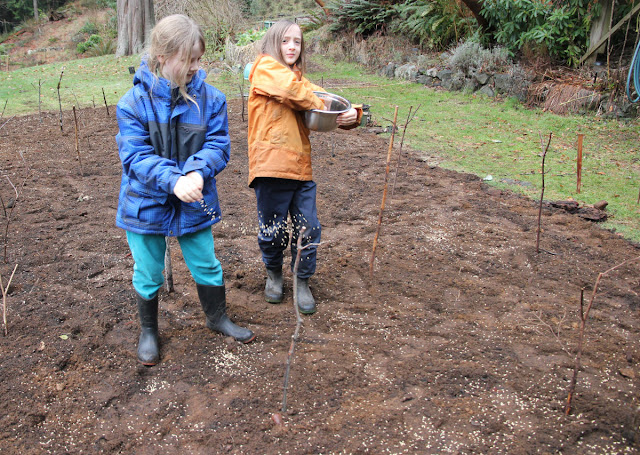 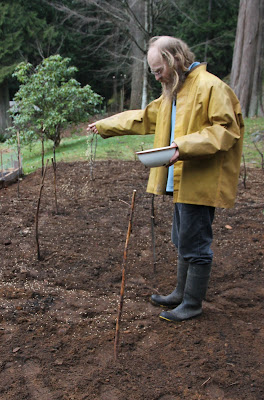 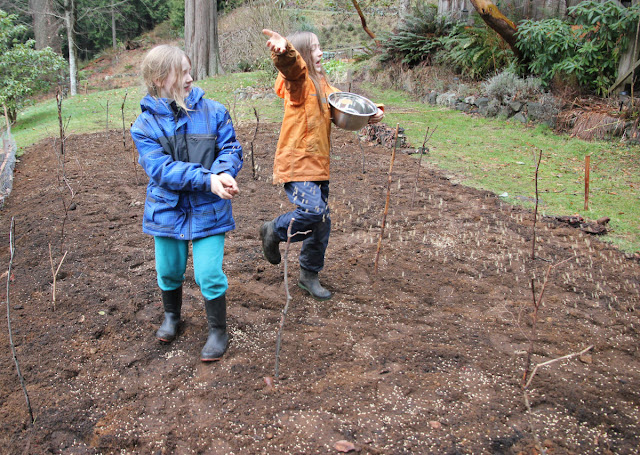 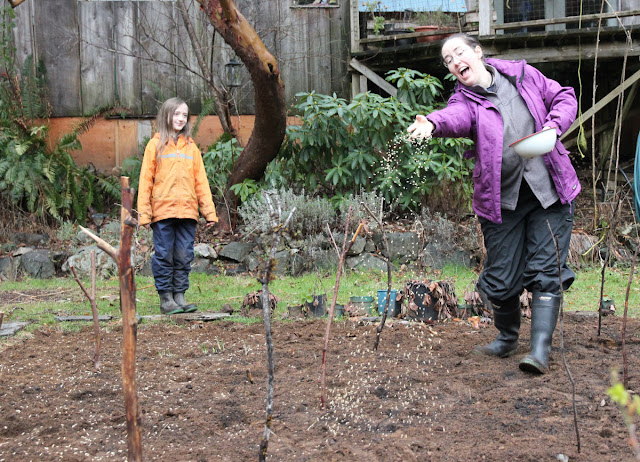 This weekend we took Auntie Julia, Uncle Keith, and the kids' 3 year old cousin, Evan, up the mountain for some early spring snow fun. And yes - it was fun!! There is nothing quite like winter sport for creating that lovely complete rosy-cheeked exhaustion! 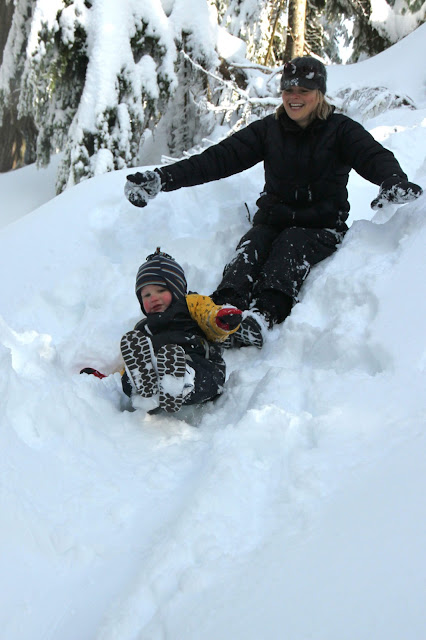 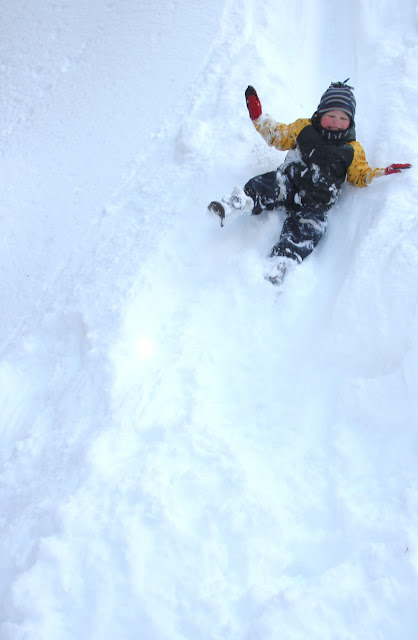 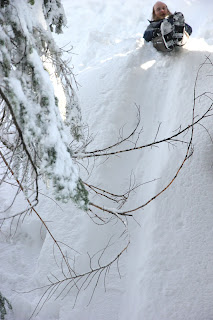 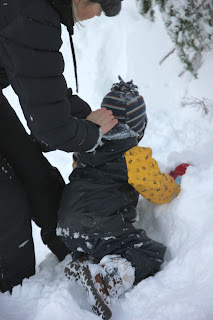 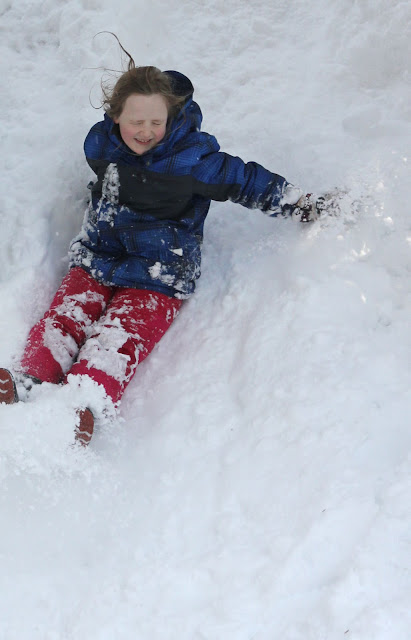 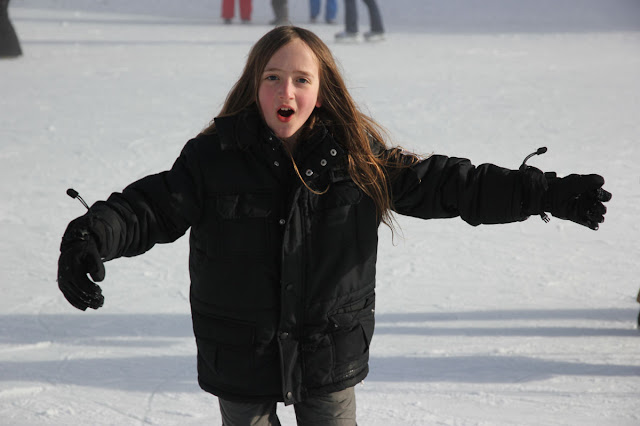 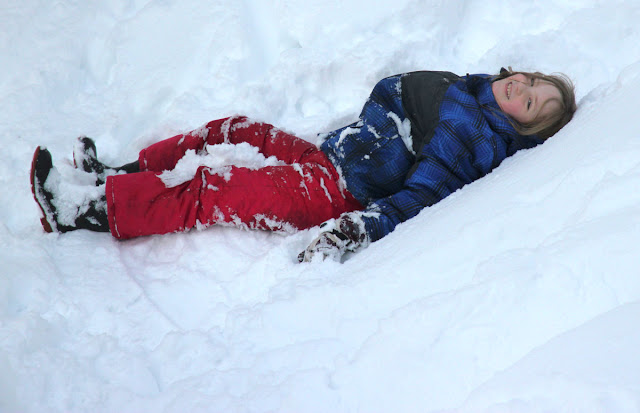 Last week we explored the section of Killarney Creek just east of Magee Rd. and in the same general area where we previously found fighting barred owls and Signal Crayfish parts, we found even more excitement: a very gruesome dead deer, many broken freshwater mussel shells (also the remains of an otter feast, we expect), a deposit of lovely clay, some recent beaver handiwork, tiny sitka spruce saplings (one felled by a beaver), a bald eagle, and a Red Legged frog which I believe was getting ready to lay eggs. Some also smelled a musty smell that we think may have been the beavers, likely hiding out nearby. Of course we didn't see them...
So today we went back again! Along the south side of the creek, we found more mussel shells, a spectacular upended tree, whose roots were encrusted with clay so that it looked like a cliff face from one side, a scattered old deer skeleton, whose bones could be pieced together again, some interesting fungi, cedar shells, and moss, and yet more evidence of beaver activity (and that musty smell, again!)

In addition to our continuing weekly outings, (F)unschool will be convening for a 3-day "camp" during March break, entitled Beach, Bog, and Bluffs. Maybe you can guess where we'll be going... 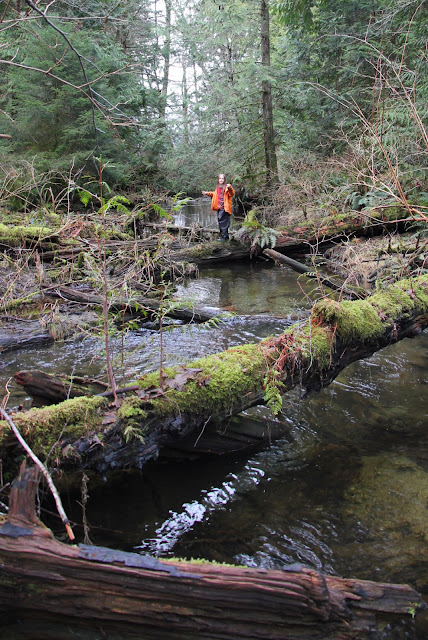 (This is cross-posted from the Bowen Nature Club blog.) 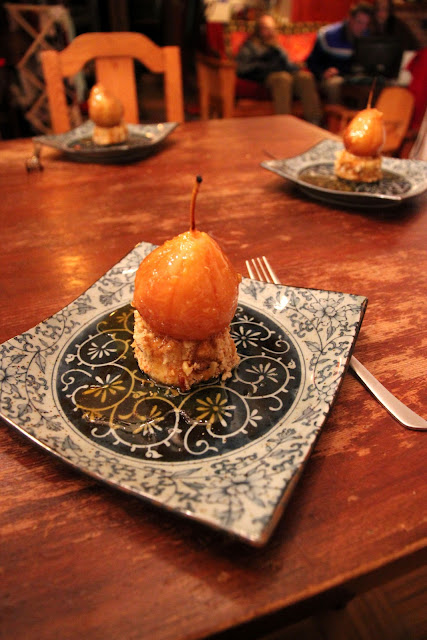 Every year we celebrate Imbolc, in honour of the early spring, by cleaning out and airing out our house. My mother calls it "Annual Freeze-the-House Day", and the name is rather catching, don't you think?

Then when the whole house is refreshed and tidied and scrubbed, and well and thoroughly freezing, and the woodstove even is cleaned and cold... we light it up and eat a hot dinner with lots of milk products to symbolize the new milk of the soon-to-be-birthing ewes. Soon we'll make our now annual visits to our friends' farm and sit with the labouring ewes in hopes of one day catching a lambing. We've never managed to witness one yet, but we keep on trying, and the chilly happy times with good friends spent hanging around in the hay in the barn are among our happiest memories!

So this year we had poached pears on walnut-breaded baked mini brie, with a tiny slice of blue cheese in-between. It was rich. I love rich food! I made it up. And I must say I was happy with it!!

In the background of this photo you can see my blurry brother Adrian and husband Markus, wrapped up in their winter coats, waiting for the fire to heat us enough, and preparing the kids' exciting grand finale: Star Trek movie!!
at 11:22 PM No comments:

NOTE: BEFORE READING THIS, read my more recent post on the issue:  Raising Tadpoles: I was wrong.

Every spring people ask me how to gather frog eggs from a pond, raise them inside, and release them again, because they know we've done it in the past. So here is finally a public answer that I can just direct people to! Raising frogs is not only fun but also hugely rewarding and, in my opinion, a very good ecology lesson, since it's crucial for the frogs' survival that you observe and replicate their natural environment.

ECOLOGICAL CONSIDERATIONS
The big jelly clumps of frog eggs that are found in ponds around Bowen right now are the eggs of red-legged frogs, which are blue-listed, meaning that they are a species at risk, primarily through habitat loss, pollution, and the introduction of invasive species. It is very important, if you are raising frogs, to raise local frogs (as opposed to other species available for purchase), and to release them back to where the eggs were found, once they develop hind legs. Raising non-local species can
mean the introduction of invasive species, causing further decline of the indigenous species and tipping the balance of the whole ecosystem.

*If you find stiffer clumps of eggs, more oval-shaped and dense, and often deeper in the water, around sticks or especially lily stems, these are likely eggs of Northwestern Salamander, and are much more difficult to rear successfully. I don't recommend it, and this article is about raising the Red Legged Frogs.

Of course, physically removing the tadpoles from their pond is not the only way to learn about frogs. Please also consider monitoring and www.frogwatch.ca
observing on site and reporting directly to frogwatch... the program is a joint work between Environment Canada's Ecological Monitoring and Assessment Network and the Canadian Nature Federation.

Here is how to raise the red-legged frogs:

SETTING UP:
EXCHANGING WATER:
FEEDING:
FURNITURE!:
RELEASE:
COMMON PROBLEMS:
The following are the most common problems I've seen, which generally mean the tadpoles die and the whole project fails. Avoid them!