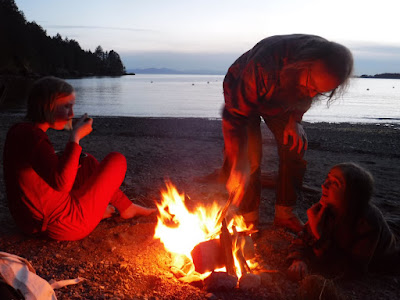 It's about 30 hours before installation day for my show, and the first properly sunny weekend of the year, which means we all worked very hard all day with art and gardening. And then we got word that Markus' grandmother has died. 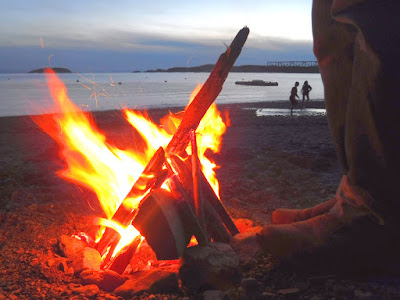 I only met Omi twice, but she welcomed me warmly, even making sure I tried handkase, which I will never do again! And Markus adored her. As I learned recently from my cousin, the egg that became him developed in Omi's body. It's hard for Markus also to know his mother is grieving and to feel so helpless.

So today when we were all worn out from work and feeling, we went to the beach and had a fire, played with sparks and water and sang a bunch of songs to the fire and the night air, and a goose who happened along. Other than the goose, we had the beach to ourselves and it felt nourishing. Markus says it feels like the end of a chapter of his life.

It's good to have a space of time and place to just be, and to mark the time passing with those we love.
at 11:33 PM No comments: