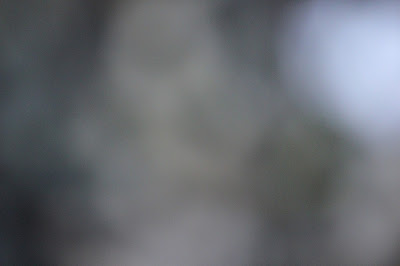 Some people leave you forever and you don't even notice they're gone. Some give forever as a gift; a promise, and you hold it like an ever-full rice-bowl until one day it is empty. Some shove forever down your throat like a weapon, leave you bleeding and retching, and then they stand smiling at your door again, arms stretched like ever. Some people hang up the phone, turn away, wave nonchalantly or blow a kiss and you never cherish it at all, until later you realize that was goodbye forever. Some people are gone forever and you can't see it. There always seems to be another door that they are not behind; another ringing phone without their voice on the other end; another day gone without them. Some people commit to forever, hit roadblock after roadblock after roadblock, find empty rice-bowls and closed doors, but they keep working to surmount the difficulties, to mend the seams, and to carry the pieces forward into forever. Some people never commit to anything; never demand anything, but when you look back at your life they have always been there, and you depend on that. Forever. Even when their voices are memories.

There are so many ways to forever, and we are always just stumbling along, never knowing where the end is, because there is none. And the people we find still holding our hearts in each moment are a piece of forever.

This is one of the times in the year we like to sit back and think about what has gone by. A year ago I could never have predicted the way this year would unfold; not even a month ago. So this year I look forward with no intention to control things, nor to predict an outcome. I just hope to ride the waves with some kind of grace, or at least to keep afloat. I hope to notice and appreciate those beautiful things I may have missed before, and I hope to leave behind seeds of love - the quietly forever kind - wherever this year brings me.

This is the fifth in a series of foraging-related articles I'm writing for our local bulletin.
Re-posted from the Artisan Office Bulletin.
~  ~  ~ 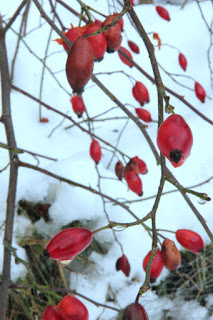 Here we are enjoying a rare white December. Some community events have had to be cancelled due to the slippery roads, while others have carried on despite the hazards, and we've trouped out in our boots and snow gear to join our friends and loved ones in celebrating. What a joy to see the sun hit the solid crystalline snow like a crash of diamonds; to see drooping snowmen ornamenting so many driveways. I saw a large white Mike Wazowski in the meadow! Before the big melt began this week, the sides of streams and edges of bluffs were adorned with the most intricate icicles; children's faces were pink from eating them, and from all the frolicking that happens when we're given the gift of snow.

So who really thinks about foraging while skating on the lake? Well... you might. Or especially while trudging through the rained-on snow we've got right now. After all... the snow is beginning to crush like snow-cone ice and you'd need a tasty syrup to flavour that. Mmmm... syrup. What about winter berries? Most of them aren't particularly edible – some are even poisonous. But rose hips - those are a gift from the winter to your health. And your snow-cone, should you desire one.

If you cut into a rose hip, you'll find they're mostly seeds, which frankly are hardly useful and very scratchy. It's the thin layer of meat just under the skin that we're after, whether for jam, jellies, or syrup. Rose hips are best harvested after the first frost, which further develops their sugars and renders that outer layer of meat soft and pulpy. In the interior I used to squeeze this pulpy jam out and eat it straight off the bush. However, in our area they won't develop enough sugar to balance out the sour taste of their extremely high ascorbic acid (vitamin C) content.

Rose hips actually have such a high vitamin C content that they have been used by many cultures as a winter immune booster, and to prevent scurvy. Of course, heating does greatly diminish the vitamin C content, but thankfully rose hips seem to retain more than many other fruits. In war-time Britain, vitamin C was in short supply due to lack of imports, and people ate a lot of rose hip preserves. In a study conducted in 1942, the British Medical Journal found rose hip syrup to contain equal to more than twice as much vitamin C as other foods such as blackcurrant jam, fresh and tinned orange juice, and tomato juice (1). One final note about vitamin C: It's important to cook rose hip preserves in non-aluminum pans, as aluminum also destroys vitamin C.

Now back to those snow-cones. I'm writing this as the syrup is cooling in the kitchen, and my kids are eager for taste-testing. But you can't pour hot syrup over snow, so they'll just have to keep waiting! 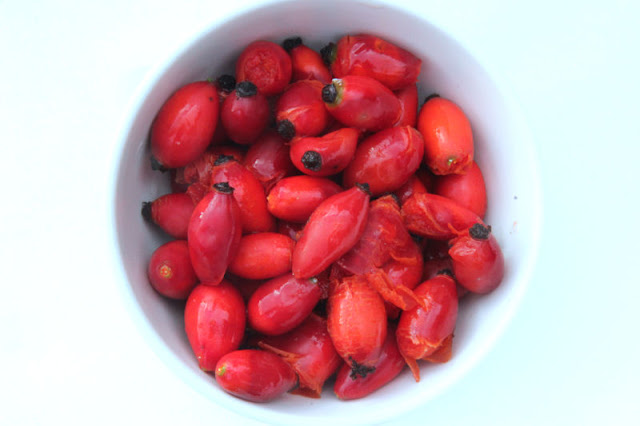 Harvesting rose hips is simple: Nothing more than twisting off the hips until you have a bowlful. Choose rose hips that are plentiful and bright red. They'll darken after freezing, and the skin of some will split open, revealing a bright red or orange paste underneath. You don't want the hips that are becoming black or brown, and those that are still pale and hard are better for making tea.

Tea: Just chop up a tiny handful of rose hips and steep in hot water until it's as strong as you like it!

Syrup: cut the rose hips in half, and dump them into a non-aluminum saucepan. Add enough water to fully cover them all, plus an extra centimetre or so; an inch higher if you've filled a medium-sized pan.

Bring to a boil, and after a couple of minutes of boiling, mash with a fork or potato masher until the concoction begins to resemble tomato soup.

When you don't see many chunks of pulp floating around anymore, and it's quite thick and creamy, strain it through a sieve or jelly bag into a ceramic bowl.

Pour the strained juice back into the saucepan (make sure no seeds remain on the sides of the pan), and bring to a boil again. Add sugar or honey to taste. Turn the heat down just enough so that it keeps boiling, and cook until it's thick enough to stick to the back of a spoon (or as thick as you like!)

Snow Cones: Let it cool, and pour it over a clean cup of this nice slushy ice we have. You can store whatever you don't consume right away in the fridge (or outside in a sealed container!) for a couple of weeks. I dare you try and make it last that long – it's also excellent on pancakes, drizzled over trifle, cakes, or even mixed with sparkling water for a special drink.

As you're probably aware, our daughter's diagnosis of Hashimoto's Disease has meant big changes in our family's diet. The biggest of those changes (and most disappointing to an 11 and now 12-year-old girl), is the removal of most grains and sugars from her diet. All sugars are out - even honey and maple syrup. We are making an infrequent exception for special occasions, however, and Sinterklaas is one of those. How can we expect our girl to go through Sinterklaas and not consume a single kruidnoot? So she and I created this recipe whereby she gets all the taste and crunch of kruidnoten, without the grains and sugar!

A note on sugar: We are using xylitol as the sweetener for these special treats, but the same rule does not apply to everyone. In fact xylitol can cause diarrhea and other problems if eaten too often or in large quantities. So if you have your own preferred sweetener, try it out! This recipe will also work with coconut sugar, and probably honey, although we haven't tried that yet. Let us know in the comments how you alter this and how it works for you! 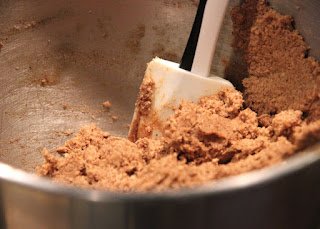 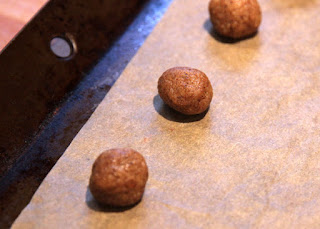 Mix in a separate bowl, then add: 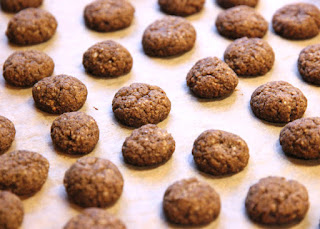 Roll into tiny balls, squish just a little flat on a paper-lined baking sheet, and bake at 350F for 12 minutes.

After 12 minutes, take them out and put the whole paper liner on a rack to cool . They look great, but are not yet crunchy, as proper kruidnoten should be!

Once cooled, put them in a dehydrator on a low-temperature setting (we used 150F), and dehydrate for a few hours until they're nice and crunchy. After being left overnight, they'll be even crunchier!

Speculaaskruiden is a mixture of spices for making Dutch spice cookies. This is my own blend, specifically for kruidnoten. It makes more than you'll need for this recipe, but believe me - you will use it up quickly!

Use a scale for this, and measure the following into a bowl. Mix it well and store in an airtight jar.
*all ingredients should be finely ground

Community Building in a Forest Village 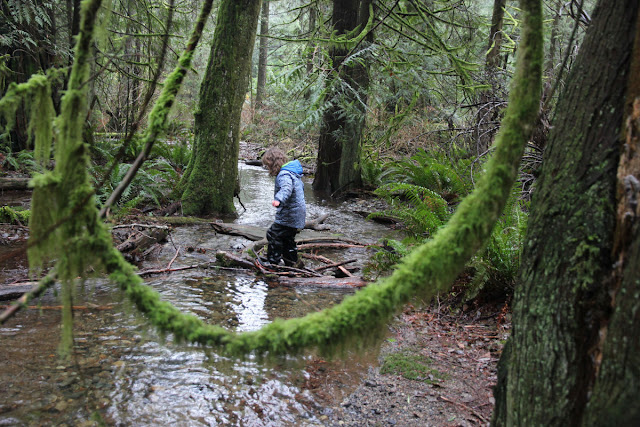 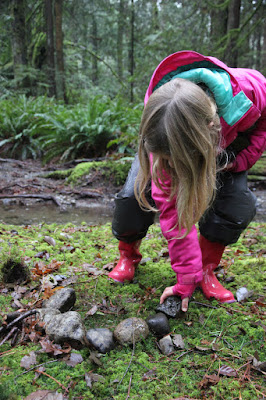 A Forest Village is something that happens often in Wild Art. After a certain amount of exploring, kids usually between about seven and twelve years old get industrious. Some begin converting whatever materials they find around themselves into decor, clothing, 'food', weapons, or other commodities, and selling them in pop-up shops. Some spend minutes or hours building all manner of lodgings, theatres, town-halls, shops, and other useful structures. Some offer classes, sharing skills they've brought with them or just discovered, while others offer tours of the local mushrooms or 'fancy places'. When necessity dictates, they build bridges and ramps, doors, 'fire pits', and ladders, and often go into business procuring the supplies for these projects and selling them to each other for various combinations of stone, stick, and leaf currencies. Safes, stashes and banks happen. Even robbers happen. And often we end up having police, mayors, town criers and all sorts of other interesting positions. Today I was instructed to be the person who tells everybody else "when it's night time - and do it at least twice!!" But I forgot the second time, because by then I was a detective, wearing a mustache of a moss we call 'old man's beard'. I was on the trail of some robbers, but when their exploits made the rest of the villagers too angry, I called a town meeting and became a spectator as the group of young villagers sorted out what was actually a genuine conflict quite ably. The robbers became spies. 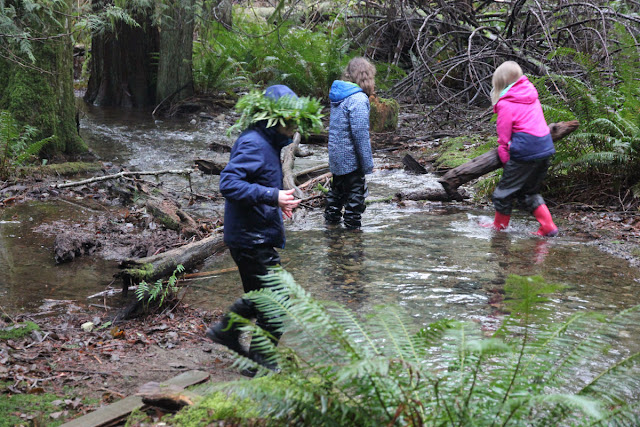 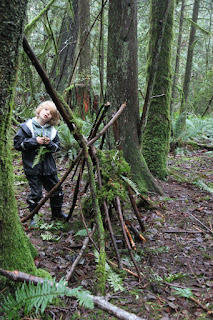 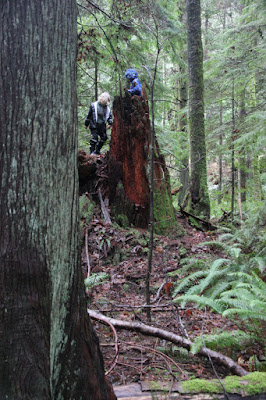 A Forest Village is a wonderful place to work out real-world problems, and to make real-world discoveries. With a lack of imposed structure, kids' imaginations are the source for everything. It's amazing to me what deep issues a group of primary kids can discover, confront, and solve with the innate compassion, dignity, and reason that has not yet been trained out of them. The forest is a dynamic yet safe vessel for these explorations, and eventually the skills developed here will become a strong foundation for those who will inherit our communities. 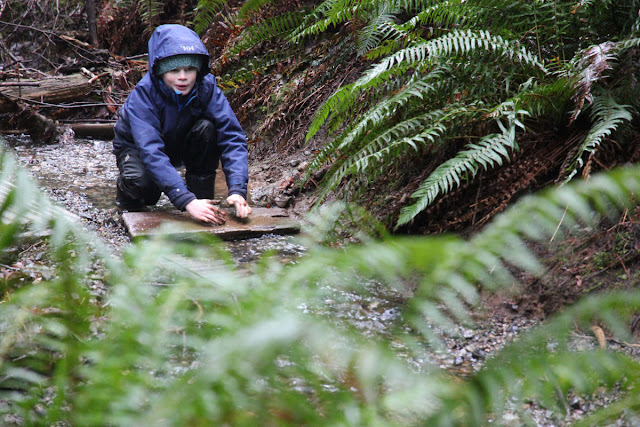 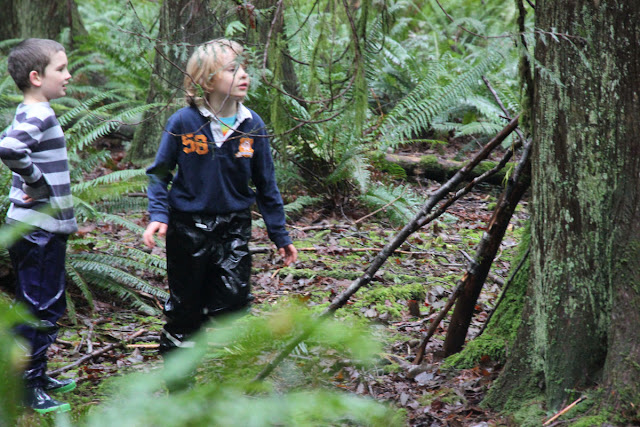 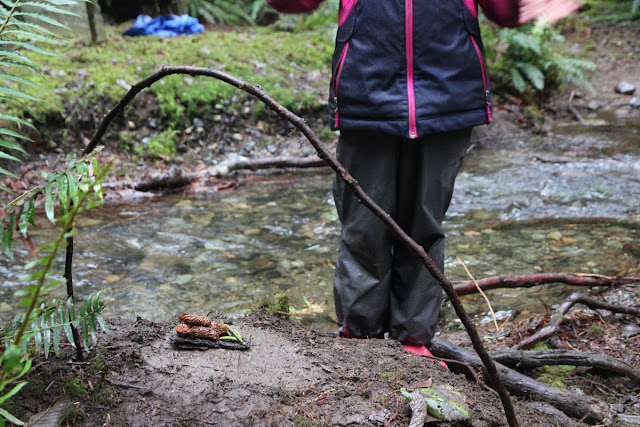