End of Another Endless Week 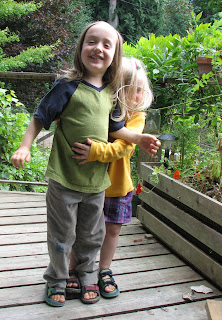 Today we had two children from Taliesin's class here to play (brother and sister), and they got along famously, as my mother-in-law would say. The three older kids ran pretty much all the way down the hill to their afternoon class, we picnicked in the meadow, flew paper airplanes in the wind, and generally frolicked until class begun. The class was great - Tali particularly likes the teacher he has these Fridays, and Rhiannon is welcome, and of course thoroughly enjoys herself, hanging around with the big kids.

In the evening we had a potluck, an Irish Music Session, and a late-night music-party to attend, all of which were wonderful, and had that sometimes elusive, warm, friendly atmosphere that we always hope for in a party. The kids were bagged by the end of it all, but we all left happily.

Bombs
And then there was this -- a bombshell dropped on me by a shall-remain-nameless other unschooling parent: The Learning Centre tests the children. Standardized tests. That is NOT what we expected. Apparently Tali is free from this for the first while, but how long does that while last? How long before he has to measure up, to compare himself to the other children? To be good enough to earn the teachers' and his classmates' esteem (or disapproval)?

When Taliesin sounds out a word at school, adults (even teachers) often comment on how amazing it is; "Oh he's incredible!" "Oh he's so advanced!" And already he has something to live up to. I would rather he was able to grow in the manner and timeliness that is right for him personally, which none of us can judge or grade. I would rather that when he printed a word, the teachers said not "how incredible", but "great! are you enjoying this?" or something along those less awed-sounding lines...

It reminds me of Siddhartha who, after losing his best friend to the Buddha of all Buddhas, finds himself truly alone, without even the presence of his family in his heart. He has found himself. And as painful and as dreadful as his loneliness is, it is that moment (in my mind) that makes his existence meaningful. Himself is the meaning of life - for him. I doubt that I will ever reach this kind of ultimate realization, but I want my children to at least get a chance, and every expectation that is nudged at them is another barrier they will have to break before they can access that small kernel of self, within.

My son is not Siddhartha, and the self is indeed a lonely place -- duende, n'est-ce pas? But he deserves a crack at his own destiny, and there is nobody who can tell him what that is; no test that can tell him if he's on the right track, or far enough along.

Anyway... enough ranting. Why stress about it, after all? I think it will be easy enough to sidestep the testing, etc, when it's time.
at 11:30 PM