Day One: Kindergarten and Preschool at the Dining Room Table. 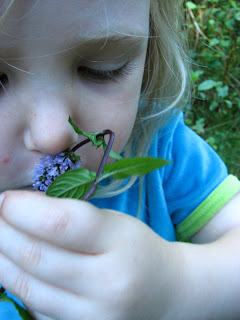 ...of course, technically, according to our educational philosophy, day one was the day we burned a candle together and pleaded with the universe to bring us a baby...

But that was before we had heard of unschooling.

Today was very enlightening, and for me a great leap into the world of unschooling. It was supposed to be our first scheduled day of homelearning: I set a schedule so that we'd actually get specific things done, and not let every day dwindle away into lego-building and drawing. Tuesdays will begin at 9 with some loose math and reading activities, then a walk through the landscape to pick up Rhiannon from preschool, during which we will study the plants and animals as they traverse the seasons. Today, since Rhiannon doesn't start preschool until Thursday, we instead made covers for the journals I bought the kids, and were planning to then do our first "wild food day", where we would harvest something from the wilds (ocean, lake, meadow, forest, etc) and incorporate it into a family-cooked meal. And... well... to be honest, the day didn't go so very well. 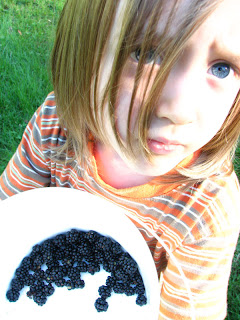 There were actually only a few hiccoughs in the morning. Tali trudged through some math activities that were too simple and therefore boring, until I remembered hating the exact same exercises as a child, for the exact same reasons ("if they just want you to show that you know the number, then why can't you just tell the number, instead of drawing six of the stupid bananas!?")... and I told him so, and suggested he just tell me the numbers and be done with it. My children will not be forced to do pointless monotonous tasks in the name of education. Education will make them WANT to draw bananas. Or something. Lesson 1 for today: no pointless banana drawing. He flipped to the middle of the book and found a nice dot-to-dot to do, thereby practising the numbers 1-20. He was very pleased with himself when he was done. Next time I'll let him choose right away.

I think Taliesin and Rhiannon (who will be starting preschool this Thursday, at the same time as Taliesin begins his first Learning Centre day) are going through some pre-school jitters. Stress. Not to mention we're all recovering from a couple of nasty viruses. Today progressed into one grumpy grumpy 5-year-old tantrum, until he did not want to help harvest the mint, nor pick blackberries, nor even cook the mint jelly he had initially been so excited about, and decided to torment Rhiannon some more, simply because I had gone to the garden to get some beans and he thought I couldn't hear him. Do you see where this is going? I lost my patience quite a few times, and by the end of the day, after we'd made amends and he'd gone to bed, I collapsed on the kitchen floor, sobbing. Oh well, I thought. I'm a crazy-woman, now! And Markus sat calmly beside me, his arm draped over my head, as I watched the white rainbows on the ceiling and found my way, again.

Those rainbows have been here for me all of my life. I can't remember much from the time before we went up to Squamish to get this repossessed trailer and bring it home. Pappa covered it with home-milled cedar siding, and stuck a sign on it: the Phantom Rickshaw. And it's been my true home ever since. When it came for rent seven years ago, Markus and I came home immediately. The white pressboard ceiling hung over my childhood bed as it hangs over my bed again now. The pattern repeats in that infuriating way where you're never really sure which rainbow is the repeater; they're so 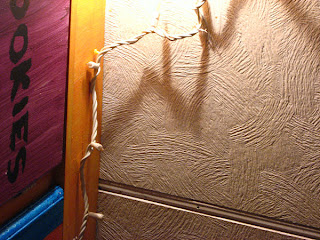 And as I lay there on the kitchen floor, looking at my painted cupboards, thinking how my mother never would have painted the cupboards so garishly, there suddenly came visions of grass to my teared-up eyes, and I remembered running through the field on the other side of the road, where this trailer originally sat, with flowers in my hand for my mother. My mother wanted to see anything that was beautiful, and she was the most beautiful woman in the world and I wanted to be her favourite person, and I wanted to see her smile. Then I realized that the reason the field was grassy was because my Pappa made it that way, wandering around with a bag of seed like van Gogh's Sower in a purple sunset, he is still there in my mind, and I see him casting long trails of grass-seed again when I look at the ceiling in this house. The reason I was running to my Mama with a flower - it was a buttercup, I think - was because she was making my world beautiful. Images of clothing and food and gardens came flooding through my mind as I watched the white rainbows in the ceiling. My parents gave me the gift of inspiration long before unschooling was in vogue. They took me out of school and bore the reprimands of my teachers, so that I could visit quaint galleries with them in town, and sit on Granville Island to watch the weirdos with crazy hair -- never realizing that I would one day be one of those weirdos attending the exact same art school. My Dad had long hair and leather clogs (and skipped down the road to my absolute horror as a teenager)... because that is who he was and he wasn't hiding it. My parents did what they felt was right, and all of it got somehow stored away in my heart to be retrieved simply by looking at those endless white rainbows of the pressboard ceiling of the Phantom Rickshaw. One day we hope to replace this old and moldy house. But those ceiling panels are coming with me. And no this unschooling is not a mistake.