how the language we use matters to progressive education and parenting 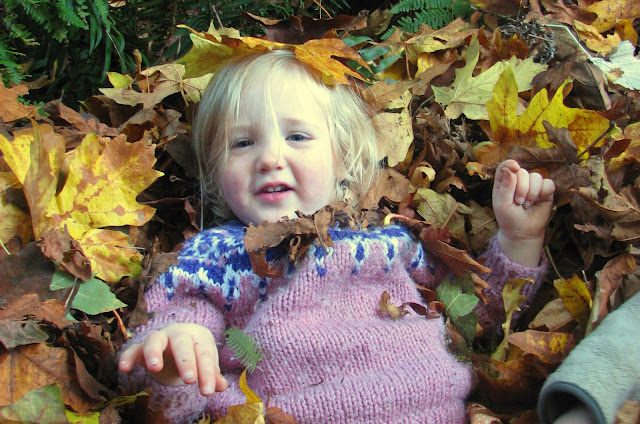 My little one looked up at me with a livid glare from where she had tumbled into the creek. I reached out my arm and she raged: "I do it self!!!" And she clambered herself back up the muddy bank. By the time she was two I knew better than to ask if she was OK or offer her a hug. I felt so disempowered that she wouldn't accept my attempts at comforting her, but I was trying my best to unschool her, so I refrained.

You probably didn't flinch when I said I was trying to unschool her; neither did I, when I wrote it. But I should have. Parents like me talk about unschooling our kids, as if it's a thing we do to them, like picking them up, changing their diapers, or schooling them. It's not. It's our conscious choice to not do things to them, but to simply offer companionship and support, and allow them to grow, themselves. And if we're honest with ourselves, nothing should be a thing we do to our kids, because growth that happens from external prodding is usually reactive; reflexive... and frequently in the opposite direction. "Counterwill" isn't a negative reaction to be discouraged; it's the most natural reaction of a child pulling away from demands in order to make space for her own learning.

Words
We forget the meaning of our words, when we speak. I say "I nursed my baby", but actually my baby nursed herself. I just held my breast out and we wriggled together to find mutually less painful positions, and she did the work of nursing. If I think about picking up my kids, even--which can be an act of total domination--does it need to be? In fact, my little ones pulled up their legs and tightened their shoulders when I lifted them. They nestled their little bodies onto my side and hung on with whatever skills they had at that age. When they didn't want to be picked up, they became loose and noodly, easily slipping out of my grasp. If I persevered and picked them up anyway, then that was truly an act I did to them, instead of with them. I asserted my dominance--sometimes to keep them safe. But it always provoked a negative reaction. Is that how I want to parent them?

Language matters. I recently read this wonderful article from the Tyee about decolonizing language. Tara Campbell writes not only about the need for correct use of language in reference to Indigenous Peoples, but also about the need for ongoing growth and engagement with the topic. Language isn't a fixed target; it moves as we learn and evolve, and it shapes how we learn and evolve. I didn't send my kids to school; I allowed them to go, when they chose to. I didn't nurse them; we nursed. Language can empower the subject, or disempower it.

Power
Kids who attend school experience many things. Try though they might, the teachers, curriculum, and system cannot truly "school" our kids. Kids learn from all school experiences, primarily about how to exist in a large group and become or retain their concept of self, and then they learn to play the system. So if nobody really "schools" our kids, and they are in fact just learning, themselves, how can we "unschool" them?

Unschooling is the process of training our minds to be free from an imposed way of learning. I have been unschooling myself for nearly three decades, now, since I started thinking critically about mechanisms of learning (and engagement) and how those are supported or hindered by my actions as a teacher or parent. I admit to having imagined I had a more directorial role than I actually did. I'm slowly learning to see my role as a friend and co-experiencer, but it's taking me longer than I hoped. It's a slow process to remove my own school-based ways of thinking and make way for progress.

Think about the words "teacher" and "parent". Both are also verbs. I teach you; I parent you. Where is the mutual respect? The terminology creates an active (superior) person and a subject. Where is the space for the subject's agency in that experience? If we want our children to run towards learning, instead of pulling reflexively away from it, our terminology has to change. Maybe that's too big of an ask, right now. But it does matter, and thinking about it will help us make choices that empower our kids.

Myths
Part of the myth that keeps us tethered to "school" thinking is a myth of superiority: Adults are superior to children. Principals are superior to teachers. The government is superior to the school. There's always somebody who knows better, to whom we should look for answers. And somehow the voices of people with superiority are always more important. The fallacy goes that adults have more knowledge, and that we learned that knowledge from more superior people, ourselves. Now we can pass that knowledge on to children. Well where were we adults when our kids were learning to nurse, or crawl, or climb, speak or sing? We were just there, being available to wipe up the spilled milk, kiss the bruises and listen intently to the first words. We oohed and aahed but hopefully didn't instruct our babies in moving their little limbs or forming their vowels! We just gave them space, and they learned. Nobody taught them. They watched us, and they tried things out, and they learned, themselves. The myth of school is that somebody has to teach the children, and the myth of unschooling is that somebody has to unteach the children. But those are myths.

Progress
What it comes down to is this: We can't teach our kids. We can only teach ourselves to listen to their needs and make space for their innate learning to happen. We can't unschool our kids. We can only unschool ourselves, by looking critically at all the ways the mythology of "school" has shaped our lives and choices. Just like when they were learning to nurse, and crawl, and communicate, our kids are watching us, and they will learn too, on their own time, in their own way, and frequently they'll learn things we never knew, ourselves. That's progress.