How Covid Saved my Husband 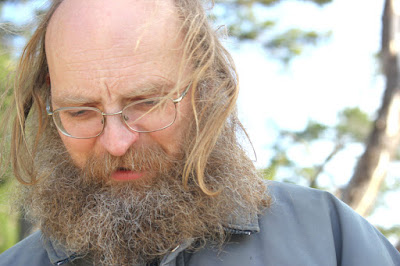 This is going to be a vulnerable post. Telling you what's happening now means telling you what happened before this, and that part was horrible. I lost my husband. Not his life - thank goodness - but I lost his heart to the point where we haven't been wearing our wedding rings for most of ten years, now.

Let me tell you our story. Nearly twenty-five years ago now I met Markus. We were introduced by our friend Chloe, because she said we were so similarly strange. Actually she coerced me to go meet him; I tried to refuse. But off we went to the bus station in Vancouver, where the bus from Victoria pulled in, and I sat complaining about the stupidity of a blind date, while watching the passengers get off the bus. One of them meekly stepped off towards the luggage, his head turned away from where we were sitting, and his long blonde hair tumbling over the brown leather jacket on his shoulders. I wanted to meet him before I saw his face. I wanted to meet him before I knew he was Markus. He walked over and shyly shook my hand, eyes lowered behind blonde lashes. It wasn't until a minute later that he braved a glance at my face; I saw his gentle green-blue-hazel eyes, and fell in love forever.

I knew in that first moment that he would be my friend for the rest of my life. Over the next few years we adventured together; we traveled and explored, and talked about everything interesting and zany in the world. We found we agreed about everything - even burning candles on our Christmas tree and how to decorate our home! Our Chloe was right: we were perfectly matched for each other in our apparent weirdness, and completely relieved to have each other to share such a fascinating world with. Everything was comfortable, and most things were easy.

After 4 years together, we got married. It was an amazing wedding, and although the idea had been mine, our families made the event so wonderful that it seemed to be a community event. It was a true bringing-together of our beautiful tribes. Then we left the city and moved to this house - the house I grew up in on this beautiful island I love. And Markus loved it too. He began telecommuting two days a week, and commuted to the city on the other three. And less than a year later we conceived our first child.

Our kids' early years were idyllic. There were times Markus couldn't telecommute, but mostly he managed to make it home in time to eat dinner with his children, and any distance that might have grown between us all during the week was mended on the weekend. We had such a rich and wonderful life, full of music sessions and parties, family adventures and fun. I loved being a stay-at-home mother, attachment-parenting my kids, and for the first time in my life I had lots of friends, and felt supported in a life I was creating for myself. We eventually decided to unschool our kids and discovered we agreed about even that! We thought we were doing really well for ourselves.

Then slowly there came the creeping feeling that something was wrong.

By our tenth wedding anniversary something was very wrong. I realized it had been years since we'd had a good conversation. I realized Markus had begun disappearing, both physically and mentally, on a regular basis. He would take the 4:30 ferry home, and instead of walking straight to his waiting family, arriving by about 5:30, he'd arrive at 6 or 7. Often I worried something terrible had befallen him, until I became used to it. He was usually just walking on the docks. When he was home he was usually drinking. Beer and whiskey in the evenings; coffee you could stand on all day. On weekends he'd sleep in until 10 and wake with such a raging headache that he was incapacitated all weekend.

I begged him to quit all the addictions, and he did. He's a good and loving husband, and wanted to do well by his children. We quit drinking together, and it seemed so easy (not to mention a huge financial advantage!) But we couldn't connect anymore. When we did talk he was often bitter; unhappy with who I was and unsatisfied with life. He was uninterested in our home and family, despite going through the motions of participation.

Don't bother trying to diagnose. I tried that. And when I realized his memory was disappearing, we involved the doctors. Sometimes he forgot important life events; sometimes he forgot what happened two minutes earlier. Constantly, he just couldn't. get. moving. He drove off the ferry at about one quarter the speed of the other cars, and it took him at least a minute to get up to speed. He took so long to answer the phone that it often went to the answering machine. He couldn't make sense of simple household tasks, even though he was simultaneously working full time as a software developer, raising two kids, and miraculously rebuilding our home on a relative shoestring and partially reclaimed materials. Despite being one of the cleverest, most interesting people I knew, his brain seemed awash with confusion. He said he lived in his "empty box". I noted that our problems began soon after we moved to this island, and asked him many times if he'd like to move back to Victoria; if maybe being nearer his parents would help, or in the city he had lived in before me. He had no interest. In anything. At my behest, he asked the doctor about his symptoms, underwent various tests including a CT scan. No cause of this misery was found.

For over ten years now, if I ask him what he thinks or feels, his answer is "I don't know". We've fought many times because this is so unbelievable to me. I've accused him of not caring; of being lazy with our relationship. But it has persisted. He says he loves me but he's just not there. The kids tease him about smiling because it happens so infrequently that it seems weird to see on his face. I wish I had been more gentle with him.

Then came this pandemic. He was reluctant to work from home, because for nearly two decades, now, from the day we moved to this island, he's been getting up at 5:30am at least three days a week and trekking into town. It's his routine. It's one of the few things that's normal to him. He has always said the lack of sleep doesn't bother him, and the morning walk to the ferry is nice. He goes to work like a zombie and wakes up by the time he's there in the city at 7:45. Also, how would he connect with his coworkers by virtual meetings? He feels connection at work is important (ironically, I thought, since we don't have much at home).

But he had to stay home, so he did. And the miracle happened. We didn't get covid; we just self-isolated. And eventually he even received a pay-cut from work. These aren't supposed to be miracle-inducing events. But here we are, one month into this isolation, and I have my husband back. He wakes up every day around seven or eight, and commutes one minute to work in the office of our home. Then he makes me breakfast and brings it to me in bed. I make him lunch and we sit on the porch and look out at the world together. Sometimes we walk down the hill to get the mail and we look at all that changes along the trail, on the way. We talk about everything. For the first time in twenty years, I can say he's my best friend again. I feel supported by his love, again. He has ideas. He has opinions. And he smiles.

And now we know: It wasn't addiction or lack of love, or depression or even illness that took my husband away from me. Those were all symptoms of lack of sleep. We know that sleep deprivation causes many terrible symptoms, including most of those experienced by Markus over the past couple of decades. He now sleeps eight to ten hours a night, and his symptoms are gone. But just in case this wasn't enough to convince me we'd found the root of the problem, we ended up going back to the mainland a few days ago. We woke up at 6:40 and drove in for a day of shopping - our first masked and gloved isolation shop. He drove off the ferry at the same speed as all the other traffic, and was helpful and thoughtful about our shopping! It was wonderful to feel in connection again - living life together for the first time in so many years! But he hadn't slept well the night before, and by the time we returned home in the late afternoon, he was exhausted. He walked around like a zombie. He couldn't understand what our evening plans with the children were, and my heart broke a little to see him so weak. It took him two days to return to the old normal. Two days to get my husband back again from one night of bad sleep.

Never again. Sure, we'll go to town again, and there will be sleepless nights. But this rift in our marriage - this long, slow tumbling off the cliff of mental wellness and family connection - this can't happen again. The life we were living - that so many of us have been living for so long - this can't go on. We can't do it. Our supposed future security isn't worth the loss of our present life, as we trudge along the conveyor belt of our society's life-plan. No way. By whatever means necessary, we're going to have to stop this conveyor belt, and build a new and better normal that affords us the fulfillment of a simple basic need: sleep. As much as food and shelter, we need sleep, and somehow our whole culture needs to build that into our expectations. We can do this! The pandemic situation is giving us impetus to develop new ways of working and socializing, and as an added bonus, we're already getting more sleep. I love this train that we're on. Let's keep it going. 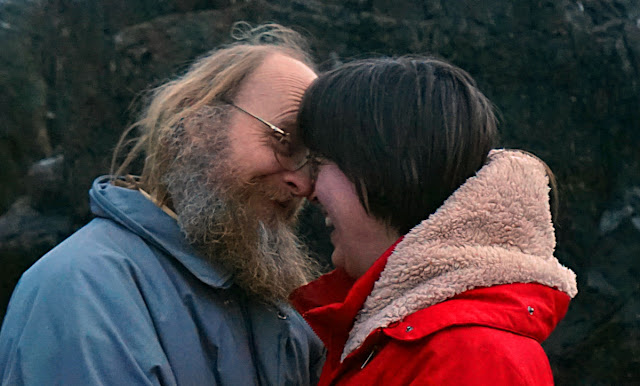 *Note*  I never write about other people's struggles without their permission. Markus has read and approves of this sharing of his story. We both hope it brings some clarity to a world where most of us have been pushing ourselves too hard, and maybe we can use this isolation time as a new beginning.
at 2:02 PM