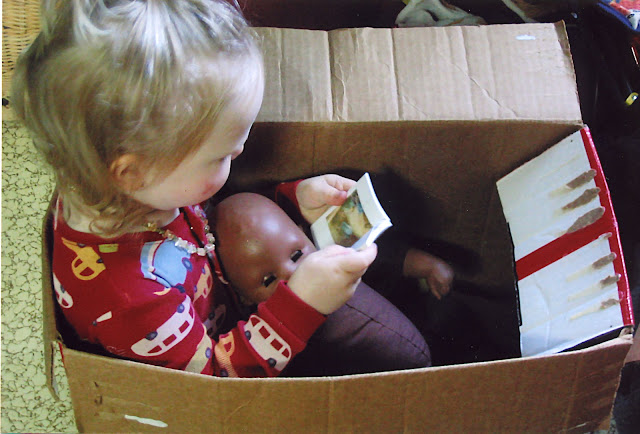 On our journey as an unschooling family, the very first struggle we had was with our own presumptions about reading. It seemed like one of the most important parenting tasks we had was to make sure our kids were reading-ready before Kindergarten. According to things I'd read at the time, this amounted to my kid having a firm grasp of the alphabet, and a strong love of looking through books and being read to. This was the bare minimum, since other parents we talked to already had their preschoolers reading short sentences, and studying phonics. The stakes were high.

From age two to four, our son was passionate about reading and language. He spoke clearly and carefully, expressing his feelings and ponderings and discoveries, and when he didn't know how to put these things into words, he drew or described, and requested the correct words for his needs. He trusted us to supply him with whatever new words he needed when he needed them. Without reading a word, in the conventional sense, he "read" to his baby sister every day, as he enthusiastically entertained her with great stories and descriptions of the books he presented her. He sang, too - long story-songs full of angst and emotion. He drew diagrams of his complex inventions, and instructed me to label them for him so I would understand all the important details. Sometimes he tried labeling, himself.

By the time my son was four, I began to worry that all this expression wasn't enough for Kindergarten, and I began tracing my finger along as I read to him, to let him see which words I was reading. My hand got in the way of not only the pictures in the books, but even of the words he was looking at. So I began reading more slowly, and giving him time to look at the picture after. He complained that I was ruining the story. Do you see what's happening, here? Because I didn't. But I do now. This was the long series of moments I stopped respecting my son. I listened to the voice of my own fears instead of his voice. This was the moment that our beautiful story times stopped being about enjoyment of stories and words and togetherness, and began to be a kind of manipulation. He stopped reading to his sister, and read only silently to himself, on the bedroom floor. I knew he was capable of figuring out the words, so I tried to get him to read me some. He refused, so I bought a new book. Jake Bakes a Cake. My son is 17 now and as far as I know he's never read that book. You know why? Because that innocent book was the last straw. After I sat him down with Jake Bakes a Cake, he didn't read another book for nine months.

Nine months later, he was in Kindergarten, fighting his own rebellion against the teacher who wanted him to respond to stories in his journal. I had finally given up completely and decided I'd trust the system to teach him, since I had clearly failed. Then we went on a road trip. Somewhere along the drive from Victoria to Nanaimo, we stopped at an intersection, and our boy whispered tentatively from the back seat: "S -- TA -- AW -- PUH". We waited. "S -- TAW-P". I remember being afraid to carry on driving, but we did. The sign was gone, and in a moment he said, "did that sign say 'stop'?" Well if I know one thing about my son it's that my enthusiasm about his discovery would kill it for him, so I put my hand on my husband's leg, and said "yes", like it didn't matter at all. 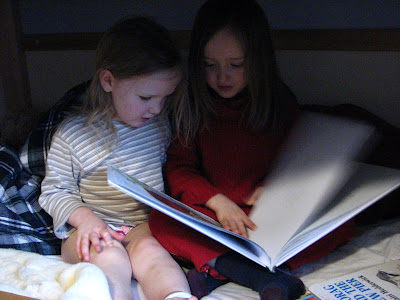 By the time we got home he had read a handful of signs, quietly to himself. And then, as we parked outside the bank: "Mama, what does 'par-kinje' mean?" It might sound like I learned to respect him at that point, but I didn't. I still thought we were on the right track to learning to read. I still thought he was measuring up. I failed to see his innate curiosity for what it was, and to nurture it without judgment. I told him that i-n-g makes the sound 'ing', and celebrated quietly when he carefully pronounced 'parking'. I failed to see soon enough that my kid had his own interests, needs and life-path, separate from those arranged for him by me and the school system. But this idea began to grow on me, and we pulled him out of school the next spring. The world of unschooling opened our minds. I began to explore the idea of respecting my kids, in order to foster self-respect in them. My son did grow to love reading again, but I will never know what might have been his life if we'd been a little wiser to begin with.

So I also need to stop judging myself. Self-respect is learned partly by modelling, and unfortunately I'm not a terribly good model for my children. Like every other parent, I am fumbling along, making mistakes and trying to learn from them. Who knows what kind of life we'd have if I'd sent my kids to school? Or if I'd been unschooled, myself? Who knows what would have happened if I had pushed Jake Bakes a Cake on my son, or had shown too much enthusiasm when he read the word 'stop'. 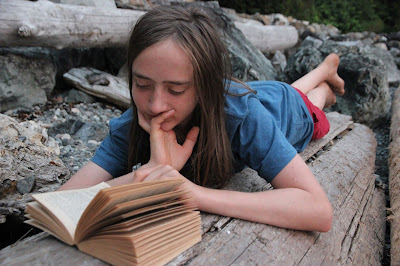 My son now likes to read fiction: sci-fi and a little fantasy. Exciting but not cruel. His spelling is not always accurate, but he uses spell-check when he feels it matters. His writing reads like speech; he uses punctuation so that I hear his voice in it. He's not much into poetry or song lyrics, and although at age nine he read an incredible amount of advanced physics research, he now reads more how-to manuals and science humour. He drops in to read over my shoulder if he hears me laughing. My daughter, who benefited from and earlier start to unschooling, is a voracious and passionate reader and reviewer of youth and historical fiction, and has memorized the scripts of countless musical theatre productions. Interestingly, she was also into advanced books at age nine, reading as much as she could from Charles Eisenstein's Sacred Economics because she fervently wanted to create a free economy. But eventually that interest waned, and now she spends almost as much time reading and writing SIMS manuals as she does writing her first novel. Her spelling is usually immaculate, but she hates ending sentences, and often forgets to put a period at the end of a paragraph. My kids are individuals, like we all are, using reading like the simple tool it is in whatever way suits their needs.

Reading is as individual a pursuit as wearing clothes. Society expects us to do it most of the time, and there will be people critical of our choices no matter what we do, but how we enjoy it is entirely up to us. Today I am respecting myself by wearing pajama bottoms and my partner's sweater. Tomorrow I'll dress up fancy for going to town. Sometimes I like to wear black with band t-shirts and sometimes I like to wear multiple big flowery skirts. Sometimes I wear those things together, and I really really hate blazers. Some days I'm a novelist and some days I'm a poet. Some days I write about parenting.

Reading is something that happens to us, because it's all around us. As long as our kids live in a world full of written words, they'll learn to read. The more we can foster self-respect in them, the more they will be empowered to make sound choices about what, when, and how they want to use this tool. The more we respect those choices, the better they will become at making them. 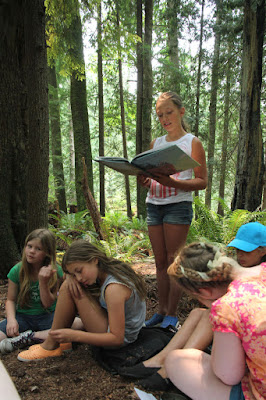 (A little something to remind us of summer.....)
The Novelist and the Poet go for lunch
Novelist : ​I want them to turn the pages.

Poet : ​I want them to linger.
Novelist: ​That’s not a good plot.
Poet: ​There is no plot.
Novelist: ​How interesting is that?
Poet: ​ It's all about what's happening now.
Novelist ​: But where does it go?
Poet​: Here.
Novelist:​ What is here?
Poet:​ Everything.
Novelist: ​ I can't follow.
Poet: ​ Just be here and listen
Novelist :​ To what?
Poet : ​ The stone in the rain. The walls of the house. The bridge in the dark.
Everything has something to say.
Novelist: ​What does the bridge say?
Poet : ​Don't jump.
Novelist:​ The bridge has no voice. The readers don't want fairy tales.
Poet : ​The bridge has many disguises.
Novelist :​ There was a bridge and thousands of cars drove over it and once in awhile someone jumped from it and died. An old story.
Poet: ​Some bridges transport cars. Some connect souls. Others fill in the gaps. Some rise out of the mist.
Novelist: ​ Why mention the mist?
Poet: ​Because visibility was limited.
Novelist: ​Is that why she jumped?
Poet: ​That's why she waited.
Novelist: ​ This is too slow.
Poet: ​I want them to know her.
Novelist: ​All they want to know is whether she jumped or not.
Poet:​ Maybe they want the real story.
Novelist: ​ That's what I have been saying. They want to know if she jumped. They don't want to hear her musings on the mist.
Poet : ​ Maybe they want to know what stopped her from jumping.
Novelist :​ Someone comes along and saves her?
Poet: ​Maybe she remembers something.
Novelist: ​That it's a long way down and the water is cold?
Poet: ​She remembers summer
Novelist: ​ This isn’t going anywhere.
Poet: ​ Butterflies, dragonflies, fireflies, hummingbirds, robins' eggs,
bare feet on fresh cut grass, sweet corn, peaches, plums.
Novelist: ​All those things might make the reader just close the book and go outside and play in the sun and not bother reading to the end
Poet: Yes.

used with permission from:
lisa shatzky
from The Bells that Ring,
published by Black Moss Press, 2017

~ ~ ~
*Hello! If you're new here, this is my unschooling blog. Eighteen years ago, just before my first baby was born, I'd never heard of unschooling, and hadn't given my kids' education any thought. Now that we've traveled a few meandering paths, and have two children who have made very different life and education choices, I'm writing a little series about some of the things we've worried about, struggled with and overcome, on this journey. This isn't intended as advice because, as we've learned most assuredly, one person's experience cannot ever be another's. But if you're a new unschooler or unschooling parent, I hope to reassure you. In many ways, unschooling is just like schooling: We're all different, and most of us manage to find our ways through whichever systems we choose, especially when we listen to our (or our kids') hearts, and respect ourselves. This series is called Respect Yourself - it's as much about respecting ourselves as parents as it is about giving our children the space to respect themselves.*