Wild Food: Killing our Own Meat

I was raised on rabbits, and, although I never had to kill them, I saw my father do it. And all of us helped slaughter them. It wasn't always easy, and, because I often named our future meals, despite my parents' warnings, often brought many tears. But rabbits are delicious, and were certainly the most ethical meat I have ever consumed. The experience also gave me a life-long appreciation for the value of meat, and interest in biology. I want that for my children.

Of course, the truth is that it's hard to kill! So we're starting small. We got our ducks this summer, with the full declared intention of consuming their eggs and potential offspring.

And today we harvested slugs. Yes -- slugs. Banana slugs. We, the intrepid harvesters of all foods wild and edible, tromped out in the dark, heavy forest looking for slugs. And found one. One green one, and one black one, which we declined to eat, because our friend Sheila says they taste like rubber tires, and even just licking them raw can make your tongue numb. (Not appetizing, we thought.)

We were terribly disappointed in the lack of slugs, turned over many an old rotten log and stone in our search, and ended up bringing home a large collection of various grubs, worms, millipedes, and one beetle and very large centipede as a result. Luckily it started raining on the way home, and we did manage to harvest 4 slugs on the return walk: one for each of us!

Here are the kids, discussing our plans at a particularly devoid-of-slugs-moment in the woods (notice Rhiannon's horrible eye infection in this video! Poor Annie!):

Finally, we did get home with the slugs, and the following photos will tell the story: 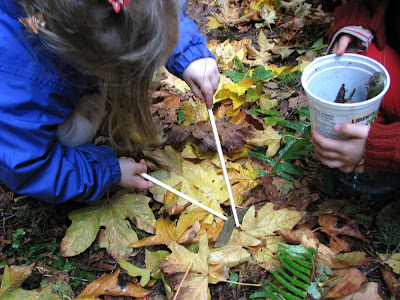 The Recipe: Deep-Fried Slugs and Green Tomatoes
Look at the slugs before you kill them. Say "poor slugs", and "I'm sorry, but I hope you taste yummy." Then pick off any large pieces of dirt. 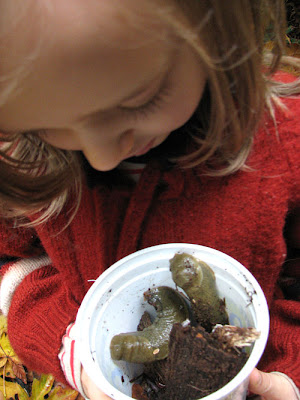 Drop slugs into a bowl with ½ vinegar, ½ hot water. Soak for 10 minutes or so to kill them and remove slime. 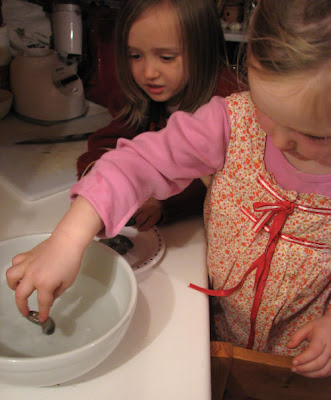 Rinse, then boil for about 3 minutes; change water. 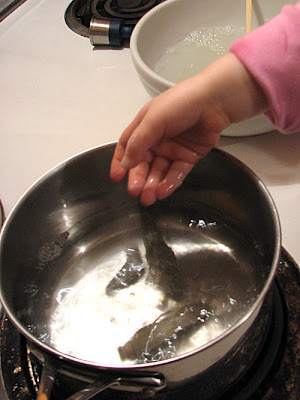 Rinse, and boil again, until they stop producing slime. Stir well to separate slime from slugs, then rinse thoroughly. Slit along ventral side of each slug, being careful not to slice the organs, inside, and pull out the digestive gland (in posterior of slug), and any other organs that come out easily. 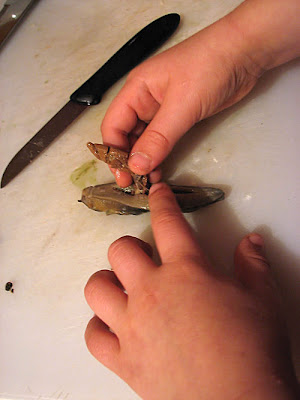 Turn slug inside out, cut a small slice into the inside of the mantle and slip out the shell. (I am sure we could eat this, but in the interest of education we took them out to examine.)
Show your amazing gutted slug to Pappa:

Rinse slugs again, cut into bite-sized pieces, and bread. We used eggs, and cornflour with a bit of salt, cumin, savoury, and garlic mixed in. We breaded halved green cherry tomatoes in the same way. 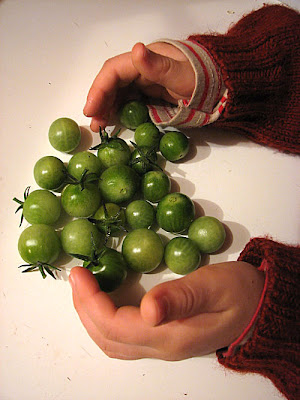 Deep-fry, until nice and brown! 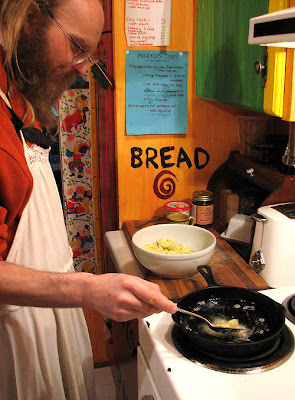 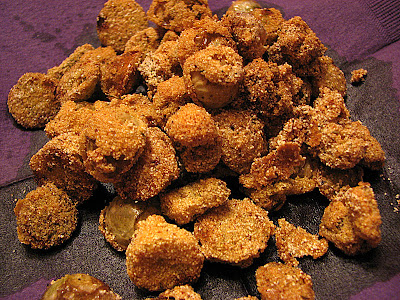 They were like a cross between chicken and calamari. A bit like escargot, although I've never experienced deep-fried escargot, so I can't say, exactly! Certainly they were delicious, and the combination with green tomatoes was lovely! 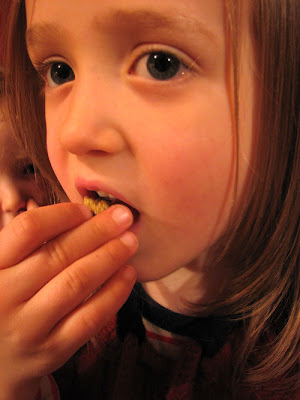 Acknowledgments:
Tim Pearce, Asst Curator and Head, section of Mollusks, Carnegie Museum of Natural History, Pittsburgh, Pennsylvania, provided crucial information to our pre-hunting research, via his comments on the Shell-Collecting Tribe: Tim advises removing the digestive gland before eating, cooking the slugs to kill any potential parasites, and soaking them in 1/2 vinegar, 1/2 water, to kill and remove slime. He also suggests changing the water repeatedly during boiling, to get rid of slime.

The Urban Pantheist also provides interesting information on banana slugs. The Latin name for our prey is Ariolimax columbianus.

A Note on Conservation:
The E-Fauna BC website lists Pacific Banana slugs as yellow-listed, which is very well indeed for our harvesting of them, but I do wonder if they might be threatened by other species, here. When I was young I remember lots of large banana slugs, and what we called "Army Slugs" (black-spotted banana slugs), and a similarly large amount of black Arion slugs. Now it seems the banana slugs are fewer, while we have an enormous increase in the number of red Arion slugs in the garden (in fact, I don't remember ever seeing them, as a child). This is just passing observation, but unfortunate if it's true that the introduced Arion slugs are pushing out our native mollusks. For this reason we won't be harvesting large quantities of banana slugs, and I intend to research whether or not Arion Rufus might cause tongue-numbness, as does the black Arion variety. If it turns out to be highly edible, we will certainly harvest them, instead!
at 10:38 AM