how to make the only good nuts and bolts

Walking with my husband the other day in the pre-rain quiet, he told me that if somebody ever wanted to trap me, they could bait the trap with nuts and bolts. He's probably not wrong about that. 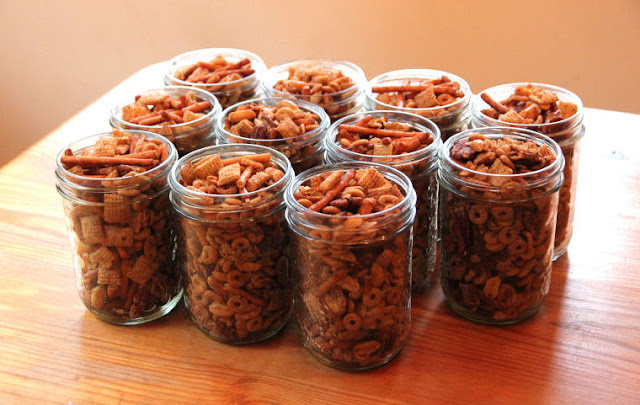 The first thing I ever remember stealing was a cookie from the strawberry jar in my step-mother's kitchen. It was a feat because, as my sister taught me, she used that giant ceramic cookie jar so she'd hear us when we stole a cookie. The precious can of nuts and bolts that Grandma had given us was right beside the strawberry jar, and that is the second thing we stole. We took it under my big sister's bed in the middle of the night (because obviously if somebody heard us crunching from under there they'd never find us, right??)... and we crunched up those nuts and bolts. Every piece was wonderful.

Grandma's nuts and bolts are so renowned that even my brother and friends back on the island where I lived with my Mum and Pappa can remember the flavour of them. At least once a year I'd return from visiting my father, step mother, and sisters with a gift from Grandma: always in a green MJB coffee can, with a piece of wax paper under the plastic lid. The green can and the feeling of lifting off the wax paper was like the take-along version of Grandma's love, and the contents were something extra special: A small stash of the dream collection of spiced and toasted cereals, nuts and pretzels that nobody anywhere could make even remotely as good as my Grandma could.

And that was by design. There were rumours about her recipe; my Mum said she was sure it came from a local newspaper back in the 60's. But that's as close as we came to knowing Grandma's secret. A few times over the years, Grandma clapped her hands and told me delightedly about her neighbour's husband who always came to visit her for some nuts and bolts. Her eyes sparkled as she described how her neighbour came begging for the recipe so she could make them for her husband, and Grandma obliged, giving her friend the recipe... but without the key ingredient. The husband kept coming to my Grandma, because yes - Grandma's nuts and bolts are the only good nuts and bolts. There's just something about them that defies explanation, and you just. can't. stop. eating. Even when it means dangerously stealing them from beside the noisy cookie jar to eat under the bed.

It took me thirty years to find the recipe. When I was in my early twenties, Grandma called me with urgency in her voice, asking whether I was going to the US anytime soon. She said she was in dire need of "Old Hickory Smoked Salt", and although she refused to tell me what she needed it for, I had a pretty good idea. I never did go shopping in the US, and never bought her that salt, but I've also never forgotten the clue she gave me that day. I thought maybe Grandma would bequeath her secret recipe to her daughter and all of us granddaughters when she got old, but a series of strokes took her communication away from us before that could happen, if it ever might have at all. The last time she spoke to me about nuts and bolts it was only to tell me again the story of her neighbour's husband and the secret ingredient she never gave away. Grandma died with the nuts and bolts recipe still shrouded.

Let me just tell you a little something about my Grandma, because there's no point sharing her recipe without sharing a bit of her personality. She was the daughter of Ukrainian immigrants, and talked about her mother hiding in the trees as her village was overtaken in war. She liked to eat perogy at the Saskatchewan Pavillion restaurant or the Ukrainian Village. She had ESP and had rather involved conversations with birds. Her house was a virtual shrine to the sixties, and included my father and aunt's nearly-in-tact bedrooms and rec room from that time. Her fingernails were also a relic of the sixties, but her conversation was extravagant. She was a bold teller of stories. She never stopped. She even went and kissed the Blarney Stone, on a trip with my Irish Grandfather - a feat that involves being dangled over the edge of a castle by strapping young men just to kiss the same piece of rock that thousands of babbling lips before have touched. She told that story often. So I can't tell you for sure how many of her stories were rooted more in fact or fiction, but they were sure amazing. She would tell you about anything she felt like, and nothing she didn't. Every time I asked about how to make nuts and bolts, I got some kind of story, but never the recipe.

So this year, two years after Grandma died, my aunt showed me something amazing. It was an old yellowed newspaper clipping in a plastic baggie, with the still-discernible recipe for nuts and bolts -- the original clipping from the December 7th 1961 issue of the Vancouver Sun newspaper. Page 64. Then she invited me to dig through my Grandma's ancient spice jars. I mean they're older than I am. And so stale you can't tell for sure that they contain what the labels say they do. Some definitely don't! All of the labels are Spice Islands, and you can't even buy those around here anymore. Who knows what Grandma filled them with.

So I bought some fresh spices and followed the old recipe to make a batch of nuts and bolts. I had to make some adjustments and guesses, because there are SO many types of "seasoning salt", and SO many types of "smoke flavoured salt". And also my family is gluten-free, so I had to adjust for that as well. From my Grandma's spice-seeking phone call, I knew the salt had to be hickory smoked, but that wasn't anywhere to be found, so I substituted the pepper for hickory smoked pepper that I found at Queensdale Market in North Vancouver, and the smoked salt for sea salt.

Bah. It just wasn't right. It was like all the other nuts and bolts in the world: disappointing. So I looked at the spice jars again.

Oh Aunt Liz I can't tell you how informative those stale old spices were. And the one that says it's old hickory smoked salt but clearly contains some kind of flavour-deprived, petrified garlic or onion? Ew. But SO informative!! Because those old jars have no ingredient listings, so I had to go researching. And that's when I found something curious: The ingredients in Spice Islands Old Hickory Smoked Salt are salt, cocoa, smoke flavouring, propylene glycol, and silicon dioxide. WHAT?! COCOA?! I knew right away we didn't need those last two ingredients, but something in my gut told me to throw a bunch of cocoa on my inferior batch of nuts and bolts. So I did. And it worked!! Grandma's secret ingredient was cocoa. And did she even know? I'm not sure. It was part and parcel of the smoked salt she always used, but I'm telling you right now: As soon as I added a couple of heaping spoonfuls of cocoa to my already-baked nuts and bolts, they were right. The kind of right only the initiated would recognize. So I brought my brother over and gave him some to sample. He approved. It's not just my imagination.

Here's my slightly-more specific version of Grandma's nuts and bolts recipe. You might adjust to your preference, but don't omit the cocoa.

Hermila, Amo, Mischa, Bree - this is for you. Make the nuts and bolts. You deserve them. We all deserve to make a hundred cans full and eat them whenever we like until our hearts are full of all the goodness. Which apparently equals cocoa. Enjoy. And thank you, Aunt Liz.
Love, Emily

Toss all together and bake at 250F until perfectly crunchy and slightly brown.
You can add Shreddies if you're not having to be gluten-free. :-)
Maybe use a spatula to turn them over a couple of times.
Cool and package in jars or cans.
Hide them.

As a follow-up to my previous post about starting our chicken-farming adventure, I thought I'd introduce you to some of our chicks. These are just those that we are getting to know best at this point. Only a handful of the 30 it turns out we have. We aren't naming any of them until we know which ones we're keeping, but for now... meet some of our babies!

Well, we've been planning this for years, and finally jumped in and did it. Our first time raising our own chickens! So exciting!!! And if you want to follow our progress, we're going to document it every Friday on our YouTube series. 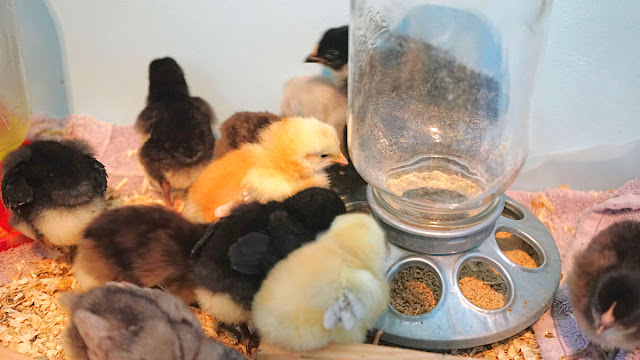 Meanwhile, would you like to meet our chicks? We have 29 chicks from Greendale Heritage Farm in Chilliwack and Wild Acres Farm in Armstrong. A mix of the following breeds of unsexed chicks, and we hope to end up with about 10 good laying hens and a rooster: 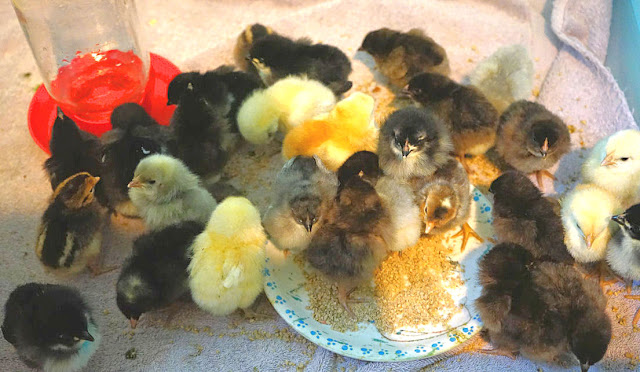 I designed a coop that met our needs for number of birds, and Markus built it using partially reclaimed materials. It's hopefully vermin-proof and easy to clean/maintain. I described it in the video. 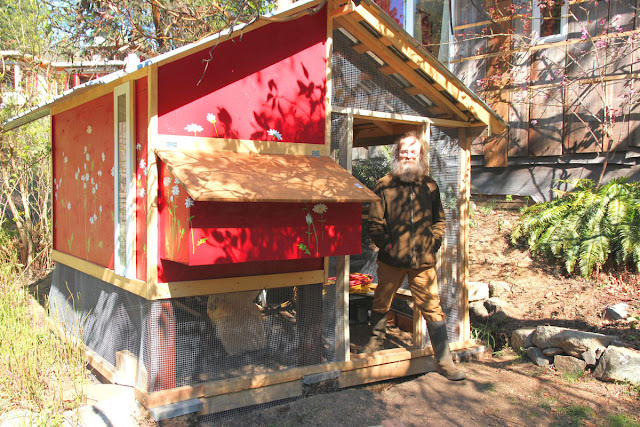 We know there will be some heartbreaking times ahead, but right now we're in the honeymoon phase... a closet-brooder full of adorable little downy fluff-balls and hearts full of dreams. Enjoy.