Instead of helping us cling to the pre-covid reality, can technology help us evolve a new one? 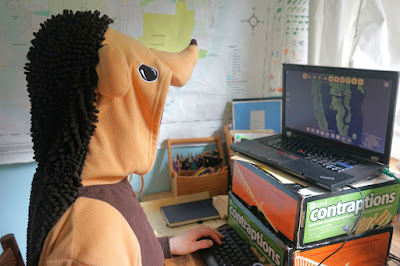 This morning I read a great article by Paul Mason, who states boldly that the end of capitalism has begun, partly because technology has given us the tools to move into a new way of living. Fabulous, and the more I read, the more I could see a vision for the future of humanity that's already developing. Mason talks about a rise in collaborative production, mentioning Wikipedia as a good example, because it's "made by volunteers for free, abolishing the encyclopedia business and depriving the advertising industry of an estimated $3bn a year in revenue." As I was reading this article, my daughter came in to get the huge contour map of our island off of the wall behind me. She says she needs it for creating our little corner of the The Earth in Minecraft. Wha--?

Apparently somebody has made the foundation for a Minecraft version of our home planet, which is being completed by Minecraft users - volunteers - over the internet. This is a bit of how my daughter is spending her time in isolation. Other than this, she's going for a run every day with my parents' dog, helping us in the garden and to set up our new chicken flock, writing, gaming and filming for her various online presences, wearing animal onesies all day and using her trapeze, working on her current novel, cooking and baking for herself and the family... basically she's living a rich unschooling life, as she did before.

The school system, however, is struggling to keep up with the changes. Mainstream school parents are worried about all the screen-time, and how to entertain kids at home who are used to being in a classroom and on a playground. Kids I know are worried about how they'll learn when the classes are all online, with little or no student-teacher interaction. I'm more worried about the lack of student-student interaction. My son's college classes are already online or out-of-book-only with tests sent over internet. My daughter's previously 2-day-a-week democratic musical theatre troupe will become a 2-day-a-week screen-based program organized by their teacher. There will be a lunch break, but previously lunch-break meant social time. What will it mean now that the players aren't playing together, laughing, buying food, and scheming together over lunch? The social gathering that is conducive to their democratic co-creation of musical theatre productions might be no more.

I have tried, in the past, to encourage my daughter to make a YouTube channel where she reads children's book for kids to watch, and she said no. No, because she wouldn't even know who she's reading to. No, because reading to kids means kids sit close and you turn the pages when they want you to. No, because kids need the opportunity to flip backwards, mid-story, and No because reading to kids is about connection, and YouTube removes the connection. She's right. How in hell is our school system going to work, online? When my son's chemistry professor gives a lecture, few people engage to ask questions. My son doesn't even wear his headset. The social, community-feeling of the classroom is gone, and at the end of the class he has nothing to report.

We're trying to use technological innovation to cling to our old ways of doing things, but the current method of disseminating information via internet is suddenly failing us. We're all stuck looking for information and help to come from the top of a hierarchical pyramid, while dispensing of an essential component of education: our peers. When we look back to see how our education influenced us, it's rarely the lectures that stand out. More often we remember amazing (or amazingly horrible) experiences with our friends, choices we made personally for better or for worse, the days things went colossally not to plan, and the days we skipped school and got creative or destructive with our friends. With our friends! Like I asked before, how in hell is this going to work online??

There's going to have to be an evolution in education, as in everything else. By necessity, we're already evolving other systems, using social engagement (from a distance) and authentic sharing. People are ordering groceries online, and friends are picking up group orders, to deliver to those in isolation. Parents strapped for time and unable to fully dedicate their days to their children's needs are discovering free-range parenting and unschooling to be a solution. Small groups of people are going hiking in the wilderness - not gathering as we once did, to tromp all over one specific spot with a thousand footsteps until the spot becomes barren, but to disperse in the untraversed areas and see with new eyes, sharing discoveries from a distance of six-feet-plus. We're sharing newly discovered recipes on facebook. We're reaching out to our neighbours because the hierarchical system of caregiving that we previously depended upon is failing us, now.

We are more resilient than we realize, and coronavirus is helping us see that. It's bringing us together, even as it tears our system apart. We can depend on each other - on the goodwill and good ideas of our neighbours. We can start to put faith in our own strength and our own wits, and where will that bring us tomorrow? Maybe to a world where low-wage jobs are obsolete, and we respect each other for our expertise and creativity.

Automation and new technology is carrying us forward like this, as the Internet has enabled Wikipedia and other collaborative enterprises, self-checkouts have enabled a more democratic, people-based system of grocery shopping, as we're empowered to self-organize, and often help our neighbouring shoppers sort out their orders. In my community, the woman who manages our local grocery store has become a hero, as she regularly posts social media updates on how the store is organizing, and how people can make the new systems work. Yes, she works at the cash register, and that part of her job could one day be replaced by machine-labour, but she's respected for her community engagement and social awareness - made possible by social media and our present need for her ingenuity and compassion. I like to imagine a world where we can all contribute our innate skills and nobody will be slaving away at low-wage jobs for mere survival. Low-wage jobs will disappear, for sure, but as our respect for each other and for the necessity of our neighbourliness grows, we'll value each other more, and make space for everyone to be valuable. Instead of being the link between us and our old systems, technology already is the link between us and our totally new future.
at 2:12 PM