Everything is More Tender

We become hardened, as parents. I tell you the good stories first, and if I share the struggles I finish with something hopeful or I say it's no big deal. When my kids excel I play it down so as not to seem too proud, and when they fail I heartlessly tell them it's a great learning opportunity while giving only small recognition to their grief. I don't do this for you; I do it to keep my own face brave. I keep telling myself every day that we're doing fabulously, until I believe it. I do it to keep the fear at bay.

Remember when our babies were tiny and we thought we might asphyxiate them if we rolled over in the night and smothered them with the blankets or with our own enormous breasts? We woke terrified that they'd stopped breathing or fallen out of the bed. Or we walked extra carefully to ensure we didn't drop them, or when they were toddlers to ensure their little feet didn't trip as they became accustomed to the rhythm of walking.

When they got older we gave them more freedoms and slowly our fears abated until we learned to let them go. They rode bicycles. They gallivanted in the city and they trekked through the woods. They climbed too high and they crashed - sometimes hard - and they recovered and we saw that they were OK. We let go and we forgot they were still our babies. We forgot that they were fragile.

Today I heard a very simple piano melody on the radio and I broke down crying in my car, because now that sound is the sound of my son's fragility. Two weeks ago, and just two weeks before his graduation ceremony, my seventeen-year-old fell out of his bed. It's a loft bed, and his floor is wooden. He remembers falling into the alleyway of his dream, and then woke on his floor with a nosebleed. He is now recovering very slowly from his first serious concussion. I've never had to deal with this before, and didn't know what to expect, so when the doctor told him he'd have to stop attending classes, stop using computers, stay away from bright lights and generally rest his brain, I worried about his graduation, but figured he'd be fine. I hardened myself.

I figured he'd wake up feeling better the next morning, and within a few days he'd return to school. But the next morning he went to play piano, and found that he couldn't remember how. I gave him a smoothie and in a blur he knocked it over with his elbow. I acted like nothing had happened, and I hardened myself more. His cat slept on him for two days, and didn't leave his side for at least one more.

He went back to the piano and tried again. His fingers couldn't find the notes. He was frustrated but remembered a few of the tunes he normally plays for leisure, and tried haltingly to pick them out, until he wandered away looking defeated. He lay back in the darkness of his room and closed his eyes. I watched him laying there, wondering who my son would become; how this would change him. I never realized how much it meant to me just to see him enjoying himself making music, and suddenly it was gone.
The next day, out of sheer boredom, he sat down at the piano again and found that he could pick out a few notes of one of the songs he likes to play. By evening he could play a few melodies, and after about five days of dedicated practice, he not only regained the ability to play two parts at once, but composed a new piece, that apparently "just came to him".
This piece is now the sound of my son healing himself. He's not finished healing, yet. He can't yet use screens for more than a few minutes every day; he can't go out in the sunshine or read for very long, or practice parkour in the forest as he liked to do, before. But he can play piano. This song is the sound of dedication and hope and the promise that my son will come back from this concussion, and that even if his life is changed, his spirit is still thriving. Thank goodness for that, and for my grandmother's piano. He lets me hug him more, now. He cracked open my hardened heart and everything is more tender, now.
at 10:32 PM 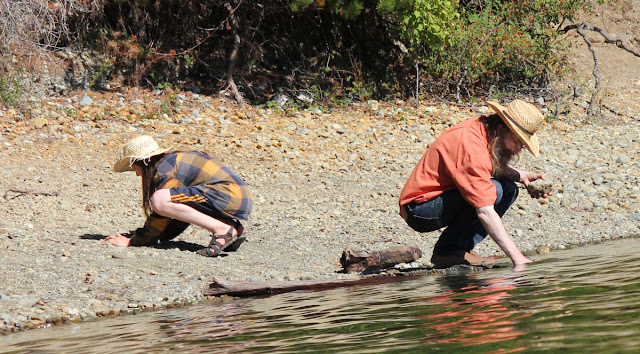