One fabulous outcome of my son Taliesin's school experience this year was the philanthropy project. The kids were basically given free range to support a cause that is important to them, in any way they feel like! They first did some personal inquiry to decide what moved them, then collaborated with other kids with similar interests (where applicable) to decide how to support the causes they chose.

Taliesin had no doubts about the cause closest to his heart: trees. He's been passionately protective of trees since he was a baby, and would scream inconsolably when they fell or when they were cut down. Now he's also been researching plant and tree communication for quite a while, and has various little experimental gardens around the house. It's no wonder, since two of his grandfathers are deeply engaged with plants and trees, and luckily he has support with his passion.

So to protect trees, he decided to raise money to support the Ancient Forest Alliance. He busked with his accordion on various occasions in the city, once walking over to the mainland himself, and other times chauffeured further afield by his camera-toting parents. He had some stiff competition: seasoned musicians and (even more daunting) our younger, charming piano-playing friend at the same time as an enormous blue-tongued chow chow, whose apparent fame and stage presence drew massive crowds. But Taliesin was undaunted. He noticed that people appreciated his music, and told me a few times that even if he wasn't making money, it was worth it just to feel he had made people happy. He had some wonderful audiences, too, including many devoted child fans, some of whom also tried out the accordion, a few accordion players, people who thanked him many times for bringing joy to their village, a woman who called him over to her balcony to toss him ten dollars, and even a man who danced a folk dance and sang along... to something Taliesin swears was improv!

For his efforts, Taliesin made a total of $150 for his school field trip (five days on a tall ship with SALTS!), plus 295.25 to donate to the Ancient Forest Alliance.

I would like to express my gratitude to Island Pacific School, and to his teacher Victoria for spearheading and supporting this philanthropy project. It was not only a fabulous opportunity for the kids to learn about philanthropy, but to make meaningful personal connections in the fields they're interested in, and to make a real positive difference in their world. And it was self-directed, to boot! Well done, IPS! And thank you.

I am also grateful to the wonderful folks at the Ancient Forest Alliance for engaging Taliesin so beautifully in this connection. The work you do is very important to him (and to all of us!), and you have done an amazing job of encouraging a teen to follow in your footsteps.
at 2:12 PM No comments:

Going barefoot is something I find very important. Maybe not in the coldest months, but absolutely when the weather is (barely) warm enough, and we're on a mission of exploration. Has it ever occurred to you how many things we miss as we walk over them with the thick soles of our shoes, unaware? How many insects and plants do we crush? How many different types of mud to we pass over without a second thought? We are missing out!

I often remind the kids to think of all the types of life that are under their feet at any moment, but I see my words drift by them like breeze. The feeling of the world under their feet - mucking and squishing and poking and scraping - doesn't drift by. It's a sensation they can't ignore. Exploring the world in bare feet makes it necessary to be engaged with the rich diversity we're walking on. Even in the city, bare feet make us aware of the various types of man-made surfaces we traverse, and the many activities that may have happened there (is it really clean enough to wear bare feet?). Our bare feet literally get us down and dirty with the world. And that, to me, is the best place to be for learning about the world.

Dr. Kacie Flegal explains that "Feet are one of the most sensory-rich parts of the human body. The soles of the feet are extremely sensitive to touch, and there are large concentrations of proprioceptors in the joints and muscles of the feet. In fact, the feet alone have as many proprioceptors as the entire spinal column! ... It is never too late to encourage the proprioceptive and vestibular systems in our own bodies as we continue to grow new neural connections, even as we age. Often, it is the proprioceptive and vestibular systems that become inhibited as adults. We lose balance and focus in our bodies and our lives and, as a result, may lose profound connections to our environment, ourselves, and other people."

So take off your shoes and run outside! Maybe climb a tree - maybe jump in a creek or a gloriously muddy spot. Maybe walk all tickly through the long meadow grass. The world is so richly beautiful, and just waiting for us to know it! 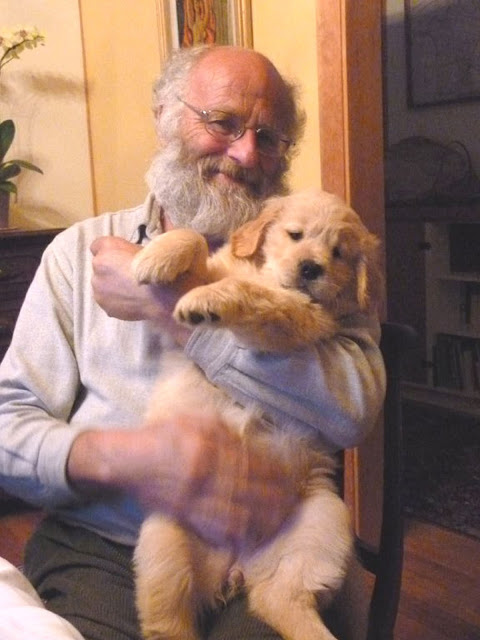 We have a cultural tradition of celebrating people after they die - and why not? But I think it's important to celebrate people while they are alive. I want the people I care about to know how important they are to me every single day of their lives. So Pappa turns seventy, today, and there's no better time than the present to write a bit about how much he means to me. How do you measure something that has always been there? How do you describe something that is so central to everything that without it everything changes?
I know what it's like to be without Pappa. When I was little, he was away often, working in the bush as a forester, and I missed him terribly while he was away. I used to sleep with pieces of his clothing, and jump to the phone when it rang, in case it was Pappa calling on a radio phone and I could get to hear his voice before handing the phone over to Mum. I wanted to say "I love you Pappa" and hear him say "yes, Em" and smile audibly, which was the way he said he loved me too. I just wanted to remember that I had him in the world.

I remember the day I began calling him Pappa. I had always called him Hardy, before that, since he was my step-father, and that's how I had known him before we married him. (Yes *we* married him. My mother asked my permission first, and included me in the wedding.) But eventually I had a brother, who was calling him Pappa, and one day as I was standing in the kitchen, drying my hands at the dish towel by the big window, Mum said that Hardy would really like it if I called him Pappa, too. I imagine I was about five, and I remember thinking of the word: how strange it felt to say it, and how it didn't sound at all like the man I knew as my father. But I tried it out. I walked over to him and said "Pappa" like maybe my mouth was broken, and he behaved as though nothing interesting had happened at all. He's like that. He takes things in stride that to me seem to turn the world upside down.

And things that turn Pappa's world upside down bewilder me. We have a very hard time getting along sometimes. Let's not pretend everything is peachy. I'm extremely sensitive, and he likes strong people. He criticizes me and I turn on him with venom. I imagine he would like me to leave this paragraph out, and I can't write without telling the whole story. He's sensitive, too, of course, and we break each other's hearts all the time. But no matter how much we argue or don't understand each other; no matter how much he imagines I don't care or I imagine he dislikes me, there will always come a day when we find each other present at a time compassion is truly deeply needed, and we can give that to each other. Pappa will say "Like a cuppa tea?" Or he will say nothing at all and hug me strongly like he does. Or he will look in my eyes and say "I'm scared", and I will see his eyes rimmed pink with fear, and he'll accept a hug just until it's time to move onto something more pleasant. It's good to have someone who can walk the hard walk of vulnerability with you when it needs to be done.

Pappa didn't have to be my father. He just was. Throughout my childhood he was there for me at the times I needed him and at the times I didn't want him. He did things that made me very angry in his efforts to protect me (like being very rude to (beloved) boyfriends, and cutting down dangerous (beloved) trees...). He protected my mother fearlessly - even from me, which was not to his benefit, most of the time, but it made me love him more. He shows me consistently that he will stand for those he loves.

I love fearlessly because of Pappa. He chose to love me as his daughter. And he still does. He made that commitment and then followed through like it wasn't a choice at all. Love is like that.

Thank you for all the love and stability that you are to me, Pappa. Thank you for being mine.
at 4:30 AM 2 comments: