Yes You Should Take Your Kids to Pride 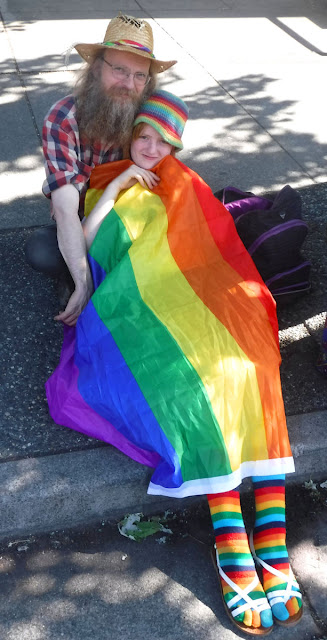 When I was about 18 my Dad told me under no uncertain terms that although he accepted gay people and had "even" gone to and enjoyed a gay pride parade, he would not want any of his daughters to "choose" to be gay. It's a hard life, he said, and God doesn't condone it.

As a straight atheist girl whose two closest friends at that time were gay, I was pissed, and reprimanded him for assuming it was a choice at all. Later it sunk in that should I discover that I was gay (or in any way unconventional), I might lose my family. I swore to myself that my own children would never face that fear.

So from the moment I became a parent, I tried to ensure that my kids never felt judged by me for their choice of play or clothing, and I provided what I thought was a broad selection of toys and clothes that were diverse in their gender-associations. (Of course now my kids tell me they wish they'd had choices that were less "hippy"... ooops...)

My son wore tutus and my daughter wore overalls. My daughter learned to use an axe before her older brother did, and he, well... despite me providing him with many alternatives, he just liked anything with wheels or motors. We didn't actually attend Pride until my kids were nearly teens, simply because it always seemed so far to travel to the city for it, but once we started, we kept going.

And as time went by, it became we parents who were educated by our children. As our kids have made many LGBT2Q+ friends, they have learned a great deal more than we ever did, and have explained not only the meaning of all those letters (and various alternatives) to us, but also called out our unconsciously discriminatory actions, and helped us to open our minds.

We keep going to Pride because it's fun, but also because, as our kids come perilously close to leaving our arms and hearth for the great world of adulthood, we want to make sure they know they can come back. Giving our kids a wholesome upbringing means accepting the whole of them - whoever they are, and whoever they become. They need to know that even if their identity becomes something totally foreign to their straight cis-gender parents, we'll keep loving and supporting them.

We still live in a world where people who identify as LGBT2Q+ are at risk for discrimination, bullying, violence, and even death, so the best we can do as parents is to provide a safe and loving home. It isn't enough to just say "hey, I'll love you no matter what", because if our kids don't see us supporting all those "no matter whats" out there, they won't know for sure. They need to see us put on our rainbows and get out there celebrating the diversity of our population. They need to see that we aren't prejudiced or afraid, so that when they discover they're not the kid we thought they were, or when they bring home their first partner, no matter how unexpected they may be, we'll welcome them with open arms. This is how we create a safer world for our children, and a better future for all of us.
at 6:40 PM No comments: