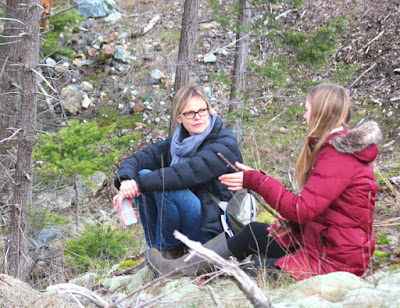 It's January, people are committing to new goals, busy having adventures and navigating their lives, but you wouldn't know it if you read my blog. I don't write a whole lot about my children anymore. Mostly it's because my kids are drifting from mid-teens towards adulthood, and are a little more careful about what they want shared about them. Whether or not I post the articles I write is their choice. It has always been their choice. Because I respect them, and I am counting on that respect to bring them safely into adulthood.

It works like this: respect means listening to my kids with genuine interest; with the understanding that even though I think I know better, I might be wrong. Respect means that what they want matters as much as what I want, and in situations that effect them deeply, it matters more. Respect means to them that I trust them to make decisions, and that means that they are responsible for those decisions.

Think of it this way: The recipe tells you to turn up the heat under your custard, and it curdles and breaks and your homemade pie filling is ruined. You probably wish you'd found a better recipe, but it's not your fault. Stupid recipe.

Now what if the recipe said to watch and gauge the temperature carefully, making your own judgements about the speed of heating and the thickness of the custard. It tells you to watch it drip off the back of a spoon and decide for yourself when it's ready. Scary, right? How will you know when thick enough is thick enough? The recipe expects you to use your own judgement! And you might get it wrong. But you'll learn, and eventually you'll be able to make custard without a recipe. And you'll be proud and confident, because you took on the responsibility of learning to make custard and you succeeded. It's your journey, it's your responsibility, and it's your custard.

Unschooling is the recipe that tells us to follow our instincts. Both parents and kids. We basically cut the kids free from a scripted childhood and help them navigate the scary but empowering world of self-determination. And as parents we cut ourselves free from the parenting script of our particular region and take on the entire responsibility of raising whole, empowered children. And it's terrifying.

From a parenting perspective (especially those of us who were raised in the system we've now eschewed), unschooling is a constant clambering struggle up a crumbling rocky slope. Over and over again we get scared and turn around, afraid to trust that our kids will truly lead the way. We put restrictions on them or we berate them or we tell them they'll never succeed if they don't follow some rules, and then we slip back down the slope and find ourselves groping in the dark, trying to restore the trust we just vanquished in our children.

Trust is huge. We need to trust that our children will heal and persist after the many bad choices they will inevitably make. They need to trust that we will be there with open arms and no judgment to hear their stories and mop up the tears when they fall. And as the Dutch proverb goes, trust arrives on foot and departs on horseback. There is no such thing as repairing the bridge with a swift apology when we make the mistake of disrespecting our children. We've broken their trust, and it's going to take a long long slow journey on foot - days or months or years of small, respectful footsteps - to entice the trust back into our relationships.

So how do we disrespect our kids? We do so in telling them we know better than they do. Sometimes we truly do, and sometimes it's imperative for their own safety that we step in and make decisions for them, or simply pull them off the road as a car approaches. It's our responsibility to know which situations merit that force, and which don't. It's also our responsibility to help them take time to navigate huge responsibilities well, so that they can learn to make decisions carefully.

I stalled my daughter going to school for a few months when she was four, even though all of her best friends from preschool were going. The extra time gave her an opportunity to really consider her choice and she began to see the lack of freedom her school-going friends had. In the end she chose not to go, but we made huge efforts to create opportunities for her and her closest friends to keep close. This is a child who struggles with making decisions, and would very much rather somebody else make choices for her, but as time went by, she did try out some school and other programs, and is learning to make her choices carefully, given her own needs and values. As a fourteen-year-old now, she's quite adept at not only evaluating possible outcomes of her choices, but at accepting and owning the outcomes. She doesn't always want to talk about her experiences, but I try to be an eager and compassionate ear whenever she's willing.

Respecting kids isn't about wantonly abandoning parental guidance, it's about giving them as much guidance as possible, while ensuring that we're really listening to their needs and allowing them to make their own choices. Hopefully this enables them to gain some confidence and become adults with integrity.
at 9:09 PM No comments: