Markus just documented his hike with the kids, today, and I'm glad at least one of us is posting something. You can read his lovely entry on our family journal, Tales from the Phantom Rickshaw.
at 9:10 PM No comments:

I am sometimes (thankfully less often as time goes by) asked how I expect my kids to learn anything when I'm not teaching them. Or how I can expect them ever to succeed in life with "no skills", and how can I stomach the guilt that must come with unschooling... etc. I used to defend myself because, quite frankly, I was scared. Recently I've stopped answering those questions, partly because people who ask such ridiculous questions rarely seem willing to open their minds enough to hear the answer, anyway, but also because I'm not scared, anymore. I have started to notice all the ways my kids are learning in everything we do, and with what joy and inspiration they compel themselves to learn "school skills" without my even encouraging them. 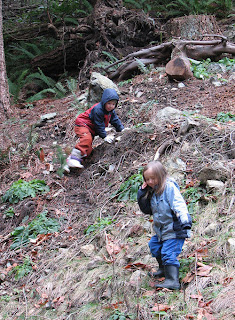 So today's Wild Food post is a celebration of all that happy, free learning. As I looked through the photos I kept noticing various "skills" appearing naturally. My only intentions, this day, were to get some fresh air, taste some yummy teas, and spend a bit of time with the kids and Opa. See what comes of having a good time ...

Gross Motor, Strength, & Agility: In other words, we hiked around a bunch, and the boys especially took great delight in teetering, leaping and cascading on the steep hill and stumps.

Biology, Observation & Classification: We went out and found Red Cedar, Douglas Fir, Grand Fir, and Ponderosa Pine. The kids practised recognising various types of conifers, and spent quite a bit of concentrated time picking off all the needles, and depositing them into the buckets. Opa helped find a Grand Fir whose branches we could actually reach. Rhiannon was particularly excited about the long pine needles, and went to great lengths to reach and pick a whole heap of them, herself. 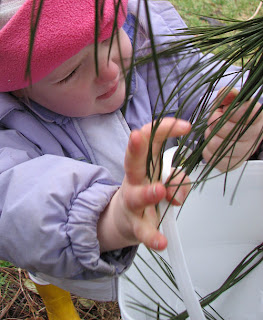 Magic: We found this caterpillar happily munching away at some frozen, frost-coated blackberry leaves! We have no idea what it is, but we were all a little enchanted to find it living so happily in the cold winter! 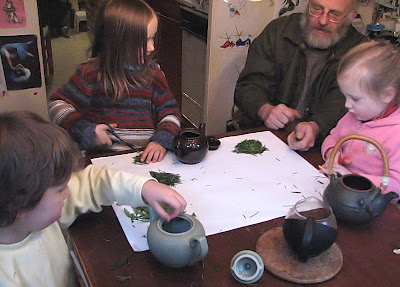 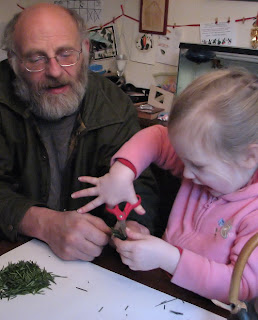 Fine Motor Skills, Herbalism, Health, Cooking, and more Identification: Once inside (and after a bit of a play time) we sorted out the various needles into piles and talked about how healthy each type is, all while cutting up the leaves and putting a couple of tablespoonfuls of each into four little teapots. Then of course each of the four little teapots had water added, and we sat around waiting for them to steep for a few minutes, sniffing and comparing the smells. 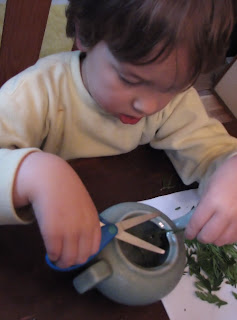 Shamefully, I've lost my notes on these at the moment, and cannot describe more... suffice it to say that the medicinal qualities of these various needles (and others that we didn't harvest) are interesting and varied. It is usually better to pick the young needles, so we'll probably revisit this project in the spring, as more of a harvest-and-store, instead of just a taste-test. Also many tree barks, roots and cambiums are useful... also this will be explored, eventually! ... and let us not forget pine-needle baskets! :--) 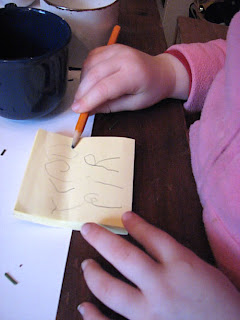 Printing, Spelling, Division & Grouping: Eventually, we had to organize in such a way that we would each get to taste each type of tea, and remember what type it was, at the same time! Not so easy, splitting 4 types of tea between 5 people! We decided it would be easier if some of us shared cups, so we split into 3 groups, according to who had been sick recently and was most likely to pass germs on, and who might already have had the same illness...

We got 3 each of 4 types of cups, so that each type of tea could go into a particular cup. One of each type of cup was then labeled with the type of tea it would contain, and by that label we would know that all such cups contained the same type of tea. Phewf. Complicated? We nearly confused ourselves into forgetting which tea was which, but it all worked out in the end. Because of all the confusion I didn't even ask if any of the kids wanted to label the cups; I just did it quickly while we still knew what was what. But guess who was still busy copying out words onto extra labels, long after teatime was over... Rhiannon! 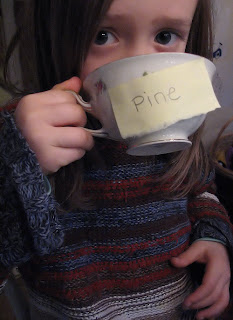 Tastebud Excercise: Time to taste! The teas were all interesting, but the biggest surprise was Douglas Fir: it smells like bland dust, or perhaps clay, but tastes wonderful! And the Ponderosa Pine was good too; even a bit citrus-y. What an adventure. We all enjoyed ourselves thoroughly, and plan to harvest large quantities of new Pine and Douglas Fir needles, in the spring.
at 7:07 PM 2 comments: